After the initial shock of encountering an old school shooter out in the wild, with AAA aesthetics and a suspiciously absent plot....I recovered and have since found a bit of fun with the game. Really, I mostly reminded myself that the level of fun to be had in Doom was about comparable to what I am getting out of playing Resident Evil: Revelations 2's Raid Mode to death (which I love)....so why would I dislike Doom? Answer is....I don't, really. I just was sort of hoping for something more directly inspired by the grim and horrific Doom 3, which was the definitive Doom I came to enjoy.*

Still, being a direct descendant of the first 2 Dooms is ultimately not bad if the game still looks great and feels good while playing. The story won't win awards (but lets hold off until I finish said campaign mode....it could surprise me) but the Snap Map option is really cool, and the designer maps already available dramatically extend the game's longevity. Short description: it's the tool which lets you make and share maps, and there are already a lot of cool maps to explore.

Next, multiplayer....I'll report on that soon. 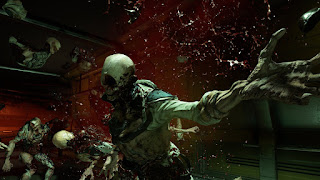 *I liked the creepy, horrific elements of Doom 3, and spent a lot of time treading carefully in that game, which oozed atmosphere. I also know that the "surprise monster jumps out from behind you" feature in Doom 3 wasn't all that popular among many gamers, but I found it nerve-wracking.
Posted by Doctor Futurity at 2:02 AM

Email ThisBlogThis!Share to TwitterShare to FacebookShare to Pinterest
Labels: doom