I'll admit it: I've felt some burnout lately. The main problem is easy to figure out: I've run so many games so consistently over the last 34 years that I've all but exhausted my own avenues of exploration. The secondary problem is more recent: finding time to prep.....I don't have a lot of free time to do that. That's why games like D&D 5E and 13th Age appeal to me so much.....they are an easy sell to my groups and make the DM's life easier.

That said, when you've run hundreds of scenarios and dozens of campaigns over the last decade and a half, it's easy to start feeling a little repetitive. Even if my players don't notice, I do.

On a lark one of my players earlier this week asked if I'd be willing to run some official D&D modules for a change of pace. I decided...why not?....and proceeded to prep for the first scenario in the Ghosts of Dragonspear Castle. As it turns out, that was a GREAT idea. The module was fun to run (we're only partially through the first module in the four-part set) and it provided a framework that I could manipulate and feel challenged as a DM managing while not stressing me with the effort of trying to come up with something new from my usual repertoire as a DM. Simply put...I probably have about three or four dozen tricks and concepts I tend to use a lot in my games, and for the last year or so I sort of feel like I'm just rehashing old, well-trod territory. By running a module I'm breaking out of my comfort zone. Plus, I can still "make it my own," too. I've reskinned it so it's set in my Pergerron setting....changing the names to protect the innocent, so to speak (and any players who might have poked around and read a copy).

So: running a module is proving to solve that issue nicely. Think I'll look at running a module this weekend for 13th Age, too....maybe an adaptation of an old classic, such as Against the Giants or something equally interesting..... 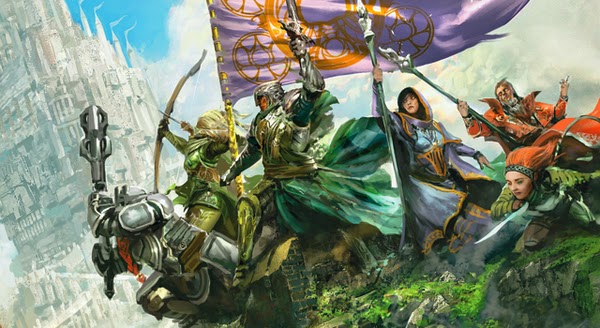 Posted by Doctor Futurity at 11:43 AM