13th Age: Heroic Icons in the Age of Strife Campaign

My 13th Age campaign jumps ahead a century and adds some new (and classic) icons to the mix. Here's a run-down on the Heroic Icons of Lingusia's Age of Strife:

The Archmage – Lord Warenis (Heroic – LG)
The immortal champion of order, Lord Warenis works behind the scenes in this era to thwart the machinations of Xauraun, the Crusader. Warenis recruits from the likely heroes of the land to send them out against the diabolical forces of his nemesis. Warenis’s aims are singular: if he stops the Crusader, you save the empire.


If you serve the Archmage: You are likely a scholar, mage or dedicate to lore who understands the true nature of the eternal conflict and why it is so important that the gods of chaos do not win. You may belong to the Esoteric Order of Hodon Systalien, one of the most dedicated servants to the archmage, or you may be an independent operator.

The Emperor – Anton Patraeus (Heroic – LN)
Anton Patraeus is a great leader of men who has struggled against the civil war that the War of Strife became, as well as the army of demons his enemies conjured up. He holds the empire together against great adversity and needs agents abroad to do his bidding.

If you serve the Emperor: You are either a vigilant solarian knight, a member of the Shadow Watch, an envoy or agent of the emperor who seeks out trouble in the land to quell it, or to hunt down the enemies of the empire.

The Priestess – The Sacrimori Setianne (Heroic – LG)
Setianne is the young, new high priestess of the Temple of Naril and the voice of all faith in the empire of Hyrkania. Setianne carries a great influence on the land, and is noted for her caring nature but her willingness to use the force of her two dedicated paladin orders (the Solarians and the Ebon Ankh) to enforce the will of Naril. She is singularly dedicated to stamping out all worship of the chaos gods.

If you serve the Priestess: you are a true champion of Naril and the empire, seeking to better humankind and his allies against the tide of chaos. You likely are a priest, scholar or advocate for the church, or a paladin or fighter who has taken up arms and joined the solarian knights. Inquisitors wield magic to root out evil and destroy the demons of chaos at the behest of the Priestess as well.

The Dwarf King – King Madragor, Iron King of the South (Heroic – LN)
Madragor is also a young king a dwarves go, for his father was slain during the War of Strife when the forces of the Black Tower invaded the Iron Mountain strongholds. Madragor has sworn an oath of allegiance to the Emperor, and there are stories of how Madragor adventured with the emperor many years ago. He also seems to be especially fond of the Elf Queen, though the favor is not returned. Madragor’s interests are in eliminating all threats to his people, though the Iron Dwarves of his land are friendlier to the human empire.

If you serve the Dwarf King: you look out for your sovereign allies, but the dwarves come first. From the Deep Company, dwarves who stand against the terrors of the lower depths, to the army of the Iron Fist, the greatest general in the mountains to serve the king you are all about dwarven superiority and the destruction of those races and faiths which stand against your people. If you are not a dwarf, you are a sympathizer or one who has become enamored with the dedicated passion of dwarvenkind and seek to aid them in any way you can.


More about the Icons

The world of Lingusia is too large to have just a baker ’s dozen icons…and as such, while some icons may cast a wide net of influence, many of them are localized to their region of the world. The icons of the east are another set entirely, and the icons of the north are an enigmatic lot who greatly dislike the icons of the Middle Kingdoms. Only a few tend to be universal….the Archmage and the Crusader are known across the world for their endless conflict, for example, as is the Great Gold Wyrm who seeks the unification of dragonkind against the machinations of the Wyrmlords, who manipulate the elder brood queen to produce more chromatic spawn.

Some icons of cosmic note are not present in this era. There is no orc king, for example, and the orcs are but beastly tribes serving whatever lord of chaos happens their way in this era; but the Betrayer King fits the role nicely, and happens to be a half-orc, too. The Prince of Shadows is the avatar Wormie Vellsoth, who has taken on the mantle unwittingly from the former icon Tanis of an older era. Wormie has much to contend with in the form of The Assassin, the Fire Knife Celiobantes Astiriate, who has risen to great power as the lord of the most formidable guild of assassins in the Middle Kingdoms, one which will one day come to be feared even by the gods themselves.

Next: the Ambiguous Icons. 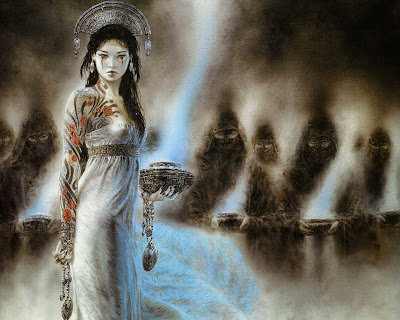