Legend has a Cover 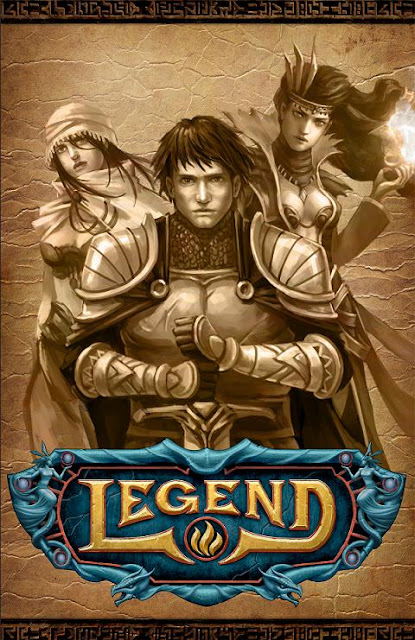 Looks like its still on schedule for an October release in digest format at $20. This is going to make "buy in" from players a lot easier for me.

I would like to be the first to point out that this cover will do nothing to assuage the concerns of the cleavage-in-art nazis out there who were blasting RQII for a couple pieces of art that were considered less about "sorceresses doing magic" than about "strippers doing magic" but oh well.

My take has been presented in various forum battles on this: I could care less about sexy art (other than that I appreciate it too) but rather I prefer my fantasy or SF art to be realistic. At least the two gals on this cover don't look like they plan in taking on an army of orcs in their lingerie....maybe hurling spells from a distance instead? The gal on the left looks like a non-combatant type. Which I would like to point out Runequest...er, Legend does very well. Its one of the few good fantasy RPGs out there that could start with a tale of a merchant, a minstrel, a courtesan and a squire and therefrom begin to weave a fine tale of fantasy that at no point requires that each protagonist lift a sword with proficiency.

I am very tempted to make Legend my only game of choice for a while once its out (hell, why wait, I'll just pre-emptively do so now with RQII) and see if I can break the D&D habit. It would be nice to enjoy the hobby without having to stake out a corner of the edition wars for once...!


Posted by Doctor Futurity at 6:39 PM