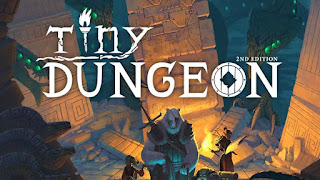 I don't think I've written much about the Tiny D6 system, but it's one of the better minimalist/entry level RPGs out on the market and has a great range of books (fantasy, SF, mecha, post-apocalyptic, supers, etc.). The core system includes a very clean and simple set of combat mechanics, but armor is an optional rule which has to be attached with some variable damage rules; this eliminated the advantage of the core mechanic with flat 1 point hit damage.

Anyway, I thought of a very simple armor rule which you can deploy that does not negate the "1 point of damage" core mechanic and does not require introducing variable damage. It works like this:

This system still requires optional armor traits to wear the suits of armor (Tiny Dungeons page 81) but otherwise lets you have some meaningful armor in the game.

Simple, right? It does require a roll, but now you can wear armor and still retain the simpler straight damage of the core rules.


Posted by Doctor Futurity at 1:11 AM