Mythic Odysseys of Theros - and Magic: The Dungeoning Continues 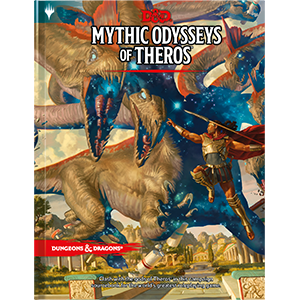 The planned D&D sourcebook Mythic Odysseys of Theros isn't exactly new news, and I've been so lazy with my blog lately (well, also busy due to work) that I haven't written much. But I read CrossPlanes today and was surprised (a little bit) by the following:

1. That people were mad it was being released (in fairness, I can agree to being upset that this means of the four sourcebooks for new settings so far released/announced only one of them was for an established D&D world)

2. That the fact that it is a Magic: The Gathering setting is frustrating. I'll be honest; I don't even really know what this means; I've always assumed MTG's "setting" was incredibly fast and loose and multiplanar.

3. That apparently people got mad at the Explorer's Guide to Wildemont setting book. But...it's like Acquisitions Incorporated, and the free advertising lifeblood that made D&D mainstream! And it's not an MTG setting. So...huh. I mean, D&D should be allowed to advance past the 90's.

4. That we old guard seem to be suffering from all the hallmarks of Old Guy Syndrome....including me although I fight it constantly, for the record; I frickin' hate getting old and I think the only inoculation I have against Nostalgia for the Past is that I have so little love or fondness for my life prior to about age 21 that I would never repeat any  of it, ever.

So I can understand frustration that we seem to be waiting forever to see revised classics of D&D settings of yore. Like everyone else I think Greyhawk, Spelljammer, Dark Sun, Dragonlance, Ravenloft (an actual setting and not the adventure), even oddities like Birthright, Jakandor, Kara-Tur and a proper reimagining of Planescape would be worthy entries to the modern D&D canon. I also think the only reason we are frustrated that these aren't showing up is because Wizards of the Coast has a very selective release schedule, and puts out so few books annually, that seeing a second Magic setting converted to D&D is annoying to the old fans.

My suspicion, though, is that WotC has a pretty good idea of what it's doing, and also knows when it's not prepared for a task such as bringing Dark Sun to 5E. Some of this, I bet, is a lack of dedicated authors on staff or by contract to tackle the job. If your writing pool is not familiar enough with something like Dark Sun it's going to have trouble making a good book out of it. But a lot of the current new authors have had years of time with Magic: The Gathering I bet, and they also see what cross-pollination between those markets could only help D&D (not so sure if it makes a dent in Magic, though).

I also suspect WotC looks at what print and PDF editions of classic content are sold on dmsguild.com, and I bet if we could see those numbers it would be surprising. Without knowing how much was sold, I can look at the Top 100 list and cannot escape noticing that there are only three settings on display in that list: Forgotten Realms by a solid mile, followed by about a dozen Eberron related products (it has traction due to the recent book, of course) and a small number of Planar themed books; arguably not the same as Planescape...but also arguably just like it, you know?

If Dark Sun, Ravenloft, Spelljammer and Greyhawk can't even make the top 100 list at any point, for better or worse WotC is probably noticing this. Even if a book hit the top 100 list for a short while, it didn't linger, which is a shame. I don't want to think this is the metric WotC might use to help gauge interest....but it very well might be.

I'd like to see those setting come to life again, but I'm also keen to see new stuff for the game, too. To that end, WotC is doing better than it has in the first four years of D&D 5E. Stuff like Ravnica of Theros being tied to MTG means nothing to me, who has not played MTG since around 1995 (well, also once in 2003ish). To me they are just interesting settings and worlds I can exploit for my own games (when and if I get back to D&D 5E; curse you Pathfinder 2E for stealing me away!)

In the end none of this bothers me as a gamer who enjoys D&D. But I concede, I'm one of those snowflake GMs who has never run a published setting (well, very rarely) anyway, so none of this matters much to me; I'd much rather have a generic sourcebook full of toolkit options I can use as I see fit. From that angle, WotC has been disappointing, such tomes with useful character, rules, monster and spell content are fairly infrequent. Still, new races in these tomes can be adapted to my own settings, and the ideas in these books make for exploitable material, so I can't say I am that put off by it all. Heck...I wish Paizo would do this a bit, something distinctly not Golarion just once would be cool.


Posted by Doctor Futurity at 5:02 PM