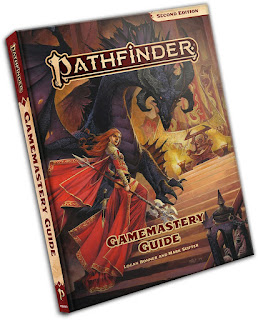 The 2nd edition Gamemastery Guide has been out for a couple weeks now and I've already been abusing it. I've spent more time reading and re-reading this book than the Core Rulebook, which may or may not be a good thing....but the Gamemastery Guide has so much useful stuff it's hard not to want to absorb its magnificence as much as possible.

The big change from 1st edition to 2nd edition is, in my opinion, the essential nature of the Gamemastery Guide. Key to this change is the fact that the rules (guidelines?) for how to make monsters and NPCs are in this tome, a change from the old form where all those rules were in the back of the Bestiary. A second change is that many of the more interesting magic item rules are now located here, rather than in the Core Rulebook, which means the core rules contain only "useful items a player might be privy to knowledge of," but the GM alone gets access to things like artifacts, relics and cursed items. Trust me: you will want these rules.

The original Gamemastery Guide identified interesting NPCs and the 2nd edition is no different, with about six stat blocks for various common encounters. It's a much needed supplement to the Bestiary. The stat blocks have shifted in tone a bit from the 1st edition, or at least include a few more familiar archetypes that are reflective of the changing times: torchbearers, plague doctors, masterminds and demonologists are reflective of the useful range of stats for NPCs.

There's a whole intro section on setting up, running and adjudicating games and handling players, a generally cleaner and more engaging section than was in the 1st edition GMG (I always thought the 1st edition advice section was a bit droll and boring to read). This isn't really going to be too useful to veteran GMs but the content on handling downtime and is priceless and helps flesh out those mechanics that are now baked in to 2E.

Also of interest is the advice on world building, which conveys information over several chapters. From designing your towns and cities (with full stat block rules) to wilderness hexcrawls this book provides some very useful content, and extremely practical; lots of useable material and not a lot of unnecessary exposition.

The most intriguing part of the book is the section on alternative and experimental rules. The ones which I found perplexing (or interesting but not suitable for my table) included valour points, stamina rules (e.g. Starfinder hit points/stamina), and alignment variants (neat but too fiddly for my needs). Other methods of stat generation allow a GM to bring the core rules back to a more familiar ability generation process. Magic Item variants let you set up rules for scaling magic items in games where you want fewer and more meaningful magic items (or alternatively no magic items).

The alternative rules which are most interesting to me, and which I will likely want to try out sooner or later included zero level characters (simultaneously a way to start a very early career campaign, a way to introduce new players with minimum fuss, and a way to run funnel style dungeons ala Dungeon Crawl Classics using Pathfinder), alternative skill point rules which bake the older skill point mechanics back in to the system, and a very interesting "Proficiency without Level" mechanic that in about one page gives you the complete rules for turning Pathfinder into a bounded accuracy system ala D&D with minimal conversion headache. Indeed, the notion of Pathfinder as a bounded accuracy system with all of its interesting implications sounds like it would be a novel experience to try out, at least once.

Overall....very happy with this book. Now that I have the finalized monster and NPC stat design rules you may finally see some more game-specific content from me soon. I am hoping I'll have some time and energy to do some conversions of existing monsters soon; I am seriously considering a Chirak adaptation, too, though I had only made it 70% of the way through my D&D 5E conversion so not sure I have the energy for that just yet, we shall see.

Posted by Doctor Futurity at 7:30 AM