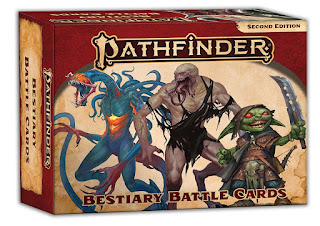 The idea of putting monsters cards out with a picture on one side and a stat block on the other is as old as AD&D 1st edition, possibly even older. I recall finding packs of these in a retail store in 1981 for AD&D and being thrilled at the find (and boy do I wish I still had those cards). Since then, this is a thing that has risen and fallen with the waves of interest, and in recent years we've been cresting a huge wave of accessories such as monster cards for RPGs.

For my own purpose, the monster cards for Cypher System (as well as Numenera and The Strange) proved to be immensely useful, though it helped that A: most Cypher monsters can fit on a card and B: they were normal card sizes. Still, as a result of their innate usefulness I began to notice what other games provided this sort of accessory. Zweihander, for example, offers tarot deck-sized monster cards, and of course Gale Force Nine produces an extensive set of cards for D&D 5E. Unfortunately I have not yet found the time to run Zweihander, and the D&D monster cards suffer from a few problems: 1st and foremost they are inconsistent sizes, which means you can't haul them around in any easily accessible way; 2nd: the cards are designed (I think) to be written on with erasable markers, but the laminate to do this makes them very sticky cards; if you wanted, for example, to use them to make a wandering monster deck you shuffle from? Ain't happening. And 3rd: if the monster wasn't illustrated in its official source, it does not have an illustration on the card, which makes flashing the card as a visual reference sort of pointless.

Along comes Paizo with a new idea: The Bestiary Battle Cards for Pathfinder 2nd edition. 450 cards in one box, each card double size from a normal playing card, with a full stat block on one side and full monster illustration on the other. The Bestiary Battle Box accomplished much that the D&D sets do not, including being easier to shuffle, with every single monster having an illustration to show players. It's got a majority of the cards with the complete stablock on a single card, too. The downsides are that any monster with a statblock big enough to spill off of the card gets a second card, which means that any complex monster in the deck now has at least two cards to pull; this means you can't shuffle them in to a random encounter deck, either. The cards are also not laminated for use with erasable markers, which means if that was a selling point for you (it isn't for me) it will be a problem here.

The storage box they come in is nice and sturdy. So far I've found it easiest to prop the box open, flip the cards so they are in two alphabetical columns and then quickly index them for stat blocks as needed. A more organized GM with more prep time might even have these cards pre-pulled, but that is not the GM that is I.

One of my players suggested that finding appropriately sized card sleeves would eliminate the two-card stat block shuffle problem. If anyone knows where to find double-sized sleeves for cards let me know! The only website I found is in China and they are shut down for Obvious Reasons right now.

Anyway....if you're a Paizo fan and you like accessories such as monster cards, this is a pretty rockin' set. A+!
Posted by Doctor Futurity at 7:30 AM