Gaming on the PC - Destiny, Anthem, Fallout 76 and More 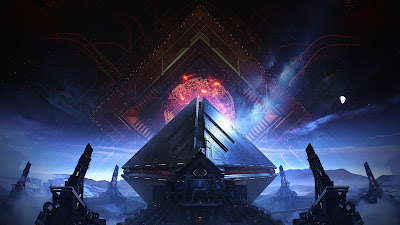 Not too long ago I snagged an Aurora R7 Alienware PC with some nice specs, loaded it up with All The Fun Stuff and have been more or less neglecting consoles ever since. My PS4 is now the place I pretty much engage the PS exclusives (plus Black Ops IIII, which I tolerate because my son loves it), and my Xbox One X is suddenly a legacy device for where I play Halo and Gears of War again (and sundry other favorites of the past).

PC meanwhile: it's where I'm busy engaging with a medley of New and a few Old. For example....Far Cry 5, which I have been enjoying more on PC than I'd expected. Destiny 2 Forsaken...a resoundingly better way to play Destiny 2. It is with just a tiny measure of self-introspection that I concede I own Destiny in all it's versions and content packs on both PC, PS4 and Xbox One. PS4 because it started there for me, Xbox One because that's where my son and I can team up, and now PC because that's the default preferred stomping ground.

Yes, I will feel a bit foolish if they ever get crossplay going for Destiny 2....thank goodness I got the extra copies (for myself, my wife and my kid, sigh) on various and sundry sales...!

Anyway, the New part of the PC universe includes stuff like Metro: Exodus, Anthem, Assassin's Creed Origins and Odyssey, and The Division 2. Overall there's a deep and compelling satisfaction to powering up the latest and greatest (ymmv) AAA game at maximum graphics and 4K default resolution and enjoying no drop in framerate. Usually, anyway....Anthem runs better in 1080p, for example...but by contrast Division 2 started up that way and is as smooth as you can imagine.

The only problem is....I just keep playing Destiny 2, which I am finally "back in to" after a bit of a hiatus. Destiny 2 came out originally after I had just finished an enormous push to finish all content I reasonably could in Destiny 1, and still play with my son who is currently working through The Tide of Iron (on good school days with homework finished). So the mood for Destiny 2 took longer, but I finally have it, and am eagerly exploring the game in great depth....and my PC account has now surpassed my PS4 explorations. The Destiny universe continues to be my favorite.

It's also a far cry from Anthem, which I am slowly working on but have grave reservations about. More on that in a future post...!

And also....yes, bear with me here....Fallout 76, which is the game everyone loves to hate. I have found it's soothing empty ambience and armies of mutants accompanied by Randos I can Ignore to be a surprisingly fun experience. Maybe not for much longer; it does require more personal dedication to get the most out of, and I've never been much of a crafter or much of a socializer in these games, after all.....but if you're the kind of person who just likes exploring and doesn't mind that the only "live" humans in the game are all a bunch of nutters played by other people then actually yeah, there's something here worth checking out. Just do it on sale, you know?

Posted by Doctor Futurity at 5:04 PM