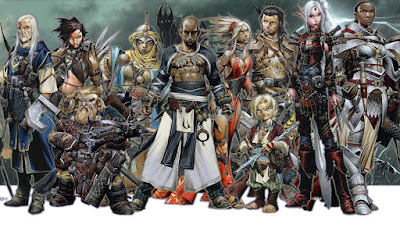 I considered posting this list as a "Five Things Pathfinder 1.0 Does Better Than D&D 5E" but realized that frankly it does these things well regardless of any specific system comparisons.

As usual with 3E era games, your mileage will vary....one man's boon is another's bane when it comes to this system and its many iterations. However for me these happen to be five of the key features of classic Pathfinder that I have always appreciated.

One of the key features of Pathfinder that changed the rules from D&D 3.5 was the skill system. It cleaned up the slightly more complex system of its predecessor while retaining all of the gritty bits people liked. Sure, you have skill synergies and other pieces still in place, but Pathfinder took the fundamental class vs. non-class focus on 3rd edition skills and refined it to keep the same level of nuance while allowing for plenty of depth in character design. You could much more easily get a return on your skills in PF than before, and the math was easier to figure out without losing any granularity. Overall more skill points, more skills (well, except for poor Rope Use from 3.0) and more flexibility in design. You still have a measure of "escalating skill ranks" tied to level but it is quite possible to make multiple characters of the same class with very different skill sets.

Pathfinder's skill system continues to haunt me as I find that I tend to want to call out skill rolls based on its list to this day, regardless of the game system I am using.

This is very much a YMMV moment as I doubt recovery mechanics would be so popular in D&D 5E and other systems without good cause....and I certainly like how systems like Cypher System handle recovery rolls a great deal. But prior to D&D 4E, the idea of Hit Points as an abstract "numerical value that counts down to when you lie down and groan" mechanic was still open for debate. Pathfinder did not introduce any special recovery mechanic to 3rd edition, and because of this it still feels legitimately in the same bucket as old school game mechanics....the mechanics where your hit points can arguably be considered a good base measurement of how long you have left before you die. When hit points change in PF, it's because of extraordinary effort, natural healing or unnatural magical causes.

What this means is that you can still provide some narrative depth to any Pathfinder session that includes the notion of "you have suffered an actual wound, from which you must somehow recover." It is nearly impossible to accomplish this in D&D 5E with any meaning, to contrast, as no wound will ever be nasty enough in 99.9% of cases that you aren't fully recovered within 1-2 days.

3. A Wealth of Character Class Options

Other D&D variants have ranged from very static class designs (B/X D&D) to rules for just about anything (3rd edition) and in between. Some editions pay lip service, trying to shoehorn a less flexible system in to options because it turns out the design intent of the system didn't mesh with player needs that well (4E), and the farther back you get the stranger and messier class options get (such as 2E's class and kit mechanics). Pathfinder however maintains and expands upon 3rd edition's dynamic class design, leading to a bewildering array of design possibilities while also introducing flavor-driven ideas like archetypes. You can build a far richer array of characters in Pathfinder than almost any other edition of the game, and it patches up many of the issues 3E had with the process. The addition of prestige classes, archetypes and other special options make for a wealth of resources for players.

There are issues with this approach, most notably system mastery creates a situation where you could build suboptimal designs, but there's a school of thought out there which I subscribe to that a game system which tries to proof itself against suboptimal design leads to a more homogenized, less interesting experience.

2. Magic is Rich and Diverse but not Cheap

Homogenous design can lead to a smaller but more tightly designed array of spells for spellcasting classes. Pathfinder is more old school (heh) in this regard....it still has spells with teeth, spells with potent effect, and spells that are extremely situational. It only allows at-will magic in cantrips, and cantrips in Pathfinder are minor effects that are not going to have a significant impact. It rewards the studious player of spellcasters but curbs some of the problems with earlier 3rd edition and caster dominance....but not at the expense of having the potential for truly fantastical magic in the game.

If I have a general complaint about magic after 3rd edition in D&D It is that it is sometimes just a bit too boring. Not true in Pathfinder and 3rd edition, though. Yes, magic in 3E was borked for a while because it took much of the power from 1E/2E but stripped it of the in-game controls (rigorous requirements for spellcasting components and time/actions needed to accomplish such spells), but Pathfinder refined this just enough to resolve key issues without necessarily (again, YMMV) making caster dominance an overwhelming issue. I personally had many great games with a mix of casters and non-casters in Pathfinder, and never had the "CoDzilla" experience like I did in one campaign with straight 3.5 edition, and the only time I experienced anything resembling that caster dominance issue happened as a direct result of some third party books on psionics, actually.

1. You Can Have A Complete Game Now

Here's the best thing of all about Pathfinder 1.0: there are about twenty-odd hard cover rulebooks, and you only technically need 2 to play (Core and bestiary), though most GMs usually have 5-10 books they consider "necesssary." For me that list includes Bestiaries 2, 3 and 4, Advanced Player's Guide, Advanced Race Guide, Monster Codex, Gamemastery Guide and probably Ultimate Combat and Ultimate Magic, but mostly for the new classes the introduce to players.

The point though is....thanks to PF 2.0, Classic Pathfinder may now be the best and most complete (and updated) iteration we will have of the 3rd edition rules going forward. Yes, it has enough issues that I could do a top five biggest problems list easily enough (stacking rules, system mastery issues, overly complex NPC stat blocks, too many feats and swingy high level play), but most people who have played Pathfinder have a hard time disputing that the game has a sweet spot from levels 1-10 that is incredibly hard to beat, and it remains fun, even if at times frustrating well into high level play.

Right now, it's hard to find a game currently on the market that offers as many tools and is essentially as complete as Pathfinder classic. And with the pocket editions, its even pretty affordable if your eyesight can take it!
Posted by Doctor Futurity at 11:28 AM