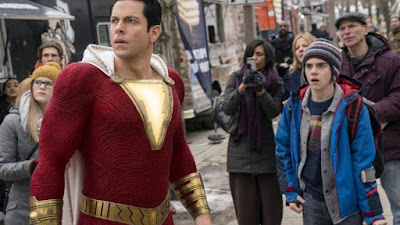 I'll keep this simple because Shazam works great when you see it with no expectations at all; the trailers do not do this film justice, and as a result I was pleasantly surprised that it...

I mean, I'm a DC fan at heart (unapologetic) and expected to enjoy this movie, but Shazam did something even the best comic films sometimes have trouble with: it managed to faithfully adapt the character to the big screen for a moderrn audience in a way which was both true to the underlying characters and tales and also resonates well with today's audience. No small feat!

If you were worried that the trailers suggested this would be a cheap Seth McFarland-esque style comedy romp, fear not; the trailers lie, and lie well. There's humor, yes, but this movie felt to me like it deserved a place in the subgenre defined by movies like Ghostbusters and the Goonies as much as any superhero film.

I'll offer no details or spoilers, it's better to see this movie straight up with no knowledge going in if possible. In the Thursday night showing I was in, every kid in the crowd cheered and clapped at least twice during the showing...when was the last time you saw kids (actual kids!) getting that excited over a movie? It was such a fun, earnest experience....absolutely worth it.

For those with kids, do note it's closer to PG-13. There's one spot where some bad CEOs get eaten, and a bit of swearing (the s word) but if you think, "same genre as Goonies" you'll understand. Totally fine for my 7 1/2 year old to see it, and he wants to see it again.

A+++ best DC movie to date, hands down, and better than most Marvel films, too.

P.S. stick around for the mid-credits twist, DC is diving deep down the rabbit hole of its traditional comics weirdness, no holds barred. Speaking of which, I need to blog about the awesomeness that is Doom Patrol soon.

Posted by Doctor Futurity at 1:00 PM