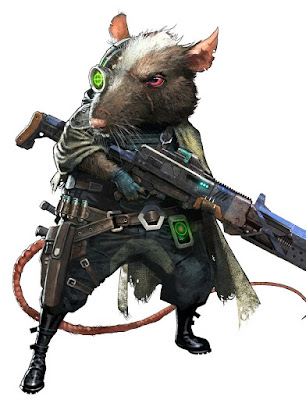 We're back to Starfinder, this time with a new campaign I started on Wednesday.....the old D&D campaign, and the newer one which I just didn't have my heart in, are going to take a break. I think I need a D&D break, it's been a long, long time since I went a week without running D&D.

Starfinder is kind of like running D&D, except with more elaborate mechanics, explicit adventuring in space, and lots of wild, thematic imagery and setting material that borrows from the best elements of Pathfinder to create an experience that (once you embrace it) is just a lot of gonzo fun. If you had to ask what game systems Starfinder is closest to in theme and feel, I would readily advise that you put it in the same basket as Gamma World, Star Frontiers and Spelljammer. Sure, Starfinder is more sci fi than Spelljammer....but it's only different in that it depicts a future fantasy universe where tech also arose, and the net result is a lot of genre mashing fun. Don't try to make too much sense of it from an SF perspective....keep it strictly in the space fantasy zone and you can't go wrong.

Last night's session involved a missing sky city, a turbulent Venusian world, silicon-based life forms and a gang of ysoki PMCs called the Orbital Watch. The plot will continue soon, and I will post the scenario after they've ploughed through it, but I continue to owe a debt of thanks to www.sfrpgtools.com which provides excellent utilities for Starfinder GMs. Take, for example, these fine statblocks I generated on the site: 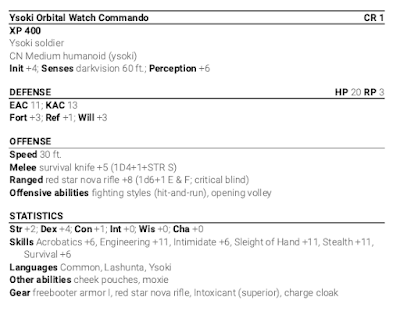 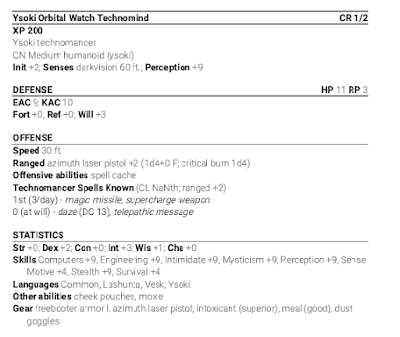 ...Cool stuff! It includes treasure generators, system and settlement generators, a starship creator, and the most useful tool of all, the monster generator which created the entries above.
Posted by Doctor Futurity at 3:03 PM