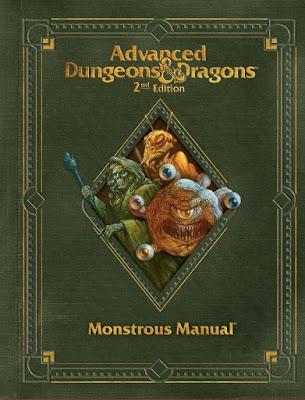 A couple weeks ago it started with the Monstrous Manual (the Premium cover edition), and today it is followed by the Dungeon Master's Guide and Player's Handbook. This is pretty much the edition of D&D that was my sweet spot from 1989-2000, the version of D&D that defined more closely than anything what I think of the game, and what I expect of it. While people feel nostalgic for D&D in the 70's and 80's, I tend to feel that nostalgia for this edition more than any other. As a teenager my time with AD&D 1st edition abd B/X D&D was formative, but I was never quite on board with the specific assumptions of the earlier edition....I wasn't a fan of much of the hard-coded limits and default expectations of  1E, with weird class/race restrictions that were justified due more to implied expectations of the genre that wouldn't necessarily fit all instances of the fantasy genre regardless; barely a nod to skills until well after I had stopped playing AD&D 1E, and lots of grizzly little mechanical systems that were tiresome.

AD&D 2E didn't shed all the grizzly little mechanical systems but it made effort to shore up some of them (THAC0 becoming default, for example), and it tonally shifted to a heavy emphasis on narrative adventuring and heroic exploits over merely being a tool for exploring dungeons*. The game's 2nd edition actively encouraged people to think outside the notion of the murderhobo*, and it was exactly what I needed at the time it came out, when I was in my first year of college. Sure, I was deeply immersed in Runequest and Dragonquest....but everyone I gamed with desperately wanted the AD&D experience, and it turned out so did I.

Anyway, these reprints are soft cover editions of the premium releases a few years ago. The soft cover element is no doubt there to help collectors distinguish these copies from the actual high-quality premium hard covers, which is fine....it also lets you keep the price down on the POD version and have some easy copies for the game table. The other downside is these are the "2nd print" versions, which contained the later format and art of subsquent book releases from the mid-nineties, and therefore your appreciation for the look may vary. Although I never had an issue with the look and style of the reprint editions, I admit my personal nostalgia firmly lies with the 1989 originals. Except the Monstrous Manual! That was a major improvement in terms of art, and the mere fact that it was an actual book instead of a ridiculous three ring binder. I understand the idea of the three ring binder....but in actual use it took too much abuse too quickly, and frankly was never as useful as it seemed like it should be.

As usual, I am left wondering if I could talk my fellow gamers into diving back in to the glory days of AD&D 2E for a while....I feel like a campaign or two down nostalgia lane would be kind of fun, maybe...

*AD&D 1E was never exclusively about either, of course, but it's focus and underlying implied universe defaulted heavily to a playstyle that I equated with how I experienced the game as a kid and teen. As such, by the time I was in college I wanted campaigns that were more interesting than that, and 2E provided lots of tonal support to that effect. It was this tonal change that for many 1E fans made 2E a hard game to shift to, of course, but it was also what led to many others like myself returning to the fold.

Posted by Doctor Futurity at 10:32 AM