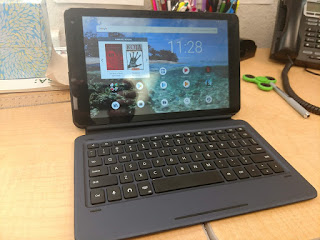 Barnes & Noble released the newest Nook earlier this month, and it's already garnering some much deserved attention as a $129 budget tablet for reading. I bought one Friday, and spent the weekend exploring it. For those of you who are like me (a tabletphile? Tablet Hoarder? Tablet fanboy?) the Nook may in fact be a tablet/ereader well worth checking out.

Here are some basic details derived from the new Nook's page:

It's manufactured by southerntelecom, which when you go their site is a Chinese producer of products that are designed for (and branded by) other companies. I have no details on their reliability, but this is worth noting given a couple years ago the very cheap entry-level Nooks briefly cam preloaded with a lot of viruses.

The specs for the device include its processor (MT8167A), which is seen in other Acer and Lenovo type tablets. It has four cores, 2 GB RAM, 32 GB of onboard storage, and an expansion port for MicroSD cards (I have a 128 GB card in my new machine right now). The screen resolution is 1920X1200 and holds up rather well for a 10.1 inch screen. It's otherwise playing in a current version of the Android OS and includes all the normal features you expect, plus an overlay with widgets (that you can remove) that is Nook store friendly.

The tablet has some optional attachments that are really interesting. A docking station lets you watch and work with it as a viewer while the tablet recharges ($34.95) and while you can pick up a $30 cover for it, you'd be crazy to do that when they offer a fantastic cover with magnetic-locking keyboard for $40 that functions very much like the Surface keyboard (powered by the tablet, magnetically connects). Even better the design of the keyboard is amazing. I have large hands, and on my Samsung Galaxy Tab S2 keyboard often accidentally bump the screen while typing, knocking me out of the app or moving the cursor around. This does not happen with the Nook keyboard, which provides enough room and provides an excellent tactile sensation....easily one of the best tablet keyboards I've used so far. The only downside is that it doesn't appear to disconnect the keyboard when you fold it back (very annoying).

The tablet itself is a fully featured android tablet, and you can dive right in to Google Play with all your existing apps. I haven't run across anything (yet) that won't run on the tablet. Other features of the tablet worth noting: it uses a conventional 3.5 mm headphone jack( yay) and it's bluetooth functionality is smooth and I had no issues pairing it with speakers. Basic but important stuff.

Some oddities I have encountered: the system seems to like making you log in twice (once to wake it up when it shows the Nook logo, and again to log in to and OS). It's sound system is not great; you will absolutely want to pair it with some speakers or plug in a headphone set as the onboard speakers are very cheap and tinny. It strikes me as overly sensitive for the touchscreen, and likes to send you places you didn't intend to go. Finally, at least until the system caught up with OS and app updates it was a little wonky maneuvering the Nook store and library, which frequently reset me back to the top. This could be due to my excessive library however, which is almost at 1,000 books now.

All in all, despite those complaints this is a really nice tablet for the price, and an excellent addition to any ereader's collection. Once again, unlike the Kindle options out there, you can load both Kindle and Nook up for access on the tablet, something you can't do with Kindles without jumping through hoops.