Battle of the Royales: The Battle Royale Genre 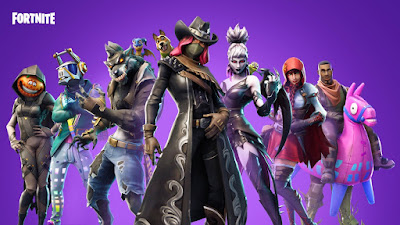 Battle Royale, if you somehow aren't either a video gamer or related to kids somewhere who are, is a style of shooter gameplay where a large number of people (usually 100) are dropped on to an island somewhere and must scavenge for liberally sprinkled gear and weapons to survive. Winner is the last man standing; and unlike many other gameplay modes, there is no respawning (normally).

The genre started with a movie, which in turn was based on a book, called Battle Royale, about a murderous game committed by a dystopian future government in Japan to pit children against one another for a duel to the death, winner takes all. The games generally don't go too deeply into the "whys and whats" of the scenarios in question: in each case there's an implied assumption that there are reasons for this never ending fight, even if it functions purely in the logic of the video game world.

Player Unknown Battlegrounds (PUBG) technically kicked this all off, but Epic Games (which was tied in to the devs for PUBG) quickly stole the idea and took the fairly average zombie defense shooter Fortnite and added a Battle Royale mode to it. It might have looked a bit like a rip off if it wasn't for the fact that, overnight, everyone everywhere was attempting to do the same thing....from N1Z1 to the newest additions in the form of AAA blockbusters Call of Duty: Black Ops IIII and (I am led to believe) Battlefield V will have a mode like this out eventually as well.

So what's the basic appeal? Why do Battle Royal games capture such a large share of the gamer (well, shooter) fanbase? I've played three of the above titles so far: PUBG on PC and later on Xbox One, as well as Fortnite in almost every iteration possible (I haven't wasted my time on the phone version, though) and finally Black Ops IIII's "Blackout" mode on PS4. N1Z1 exists, but I was less than impressed with its old survival horror edition, hard to care about whatever it's become now. I've also chosen to ignore countless knockoffs floating around in various stages of incompletion of Steam.

My experience has been that these games offer a range of appeal, but they all share the following in common:

1. Battle royale experiences are visceral but short survival experiences. You get the thrill of struggling to survive against the odds for sessions that (in most cases) can last only a few minutes though they often feel like they are longer, albeit not in a bad way. It helps greatly that most offerings are quick to get you in to new games after you die. And you will die. A lot.

2. The battle royale genre removes a lot of the safety nets commonplace in most FPS and 3PS combat modes. You don't get respawns. You may or may not get a team mode, but at its basest you're effectively in a hardcore loner simulator where seeing any other player at all means imminent kill-or-be-killed decisions must be made. Unlike most survival games out there, there's no ambiguity in place; unless the game offers a squad mode (and most do), so you need never worry that an approaching player is friend or foe; they are all foes.

3. All of the battle royale games so far keep the conflict to a localized island or region which is large, filled with secrets and oddities, and is the same map every time, for the most part (although PUBG is adding new maps). This might sound boring, but in reality the maps are so large and diverse it takes a long time to familiarize yourself with them. Each game handles this a bit differently, too; in Fortnite there's a subtle recurring theme of weirdness that continues to change the map slowly over time. Black Ops IIII injects high occult zombie weirdness into the map at odd spots. PUBG has two or three map variants, I think. The important thing is that the repetition of large maps means it takes time to figure them out, but ultimately you definitely can figure them out; playing over and over rewards you with that familiarity of terrain for future games.

4. PUBG invented a mechanism for driving the action: a shrinking zone of control in which the players are safe. Every few minutes the zone gets smaller, and anyone else outside the zone is caught in a bombard of fire and fury that kills them rapidly. This element, which works well to force players into confrontation, has been mimicked in Fortnite which uses a glowing magic shield of doom, and Black Ops IIII's Blackout does much the same, although exactly what it going on there has eluded me so far.

5. Finally, since no modern game can escape some sort of reward/tier system that incorporates possible RMT for extra cash, this is also a feature common to all of the battle royale genre. The most subtle and pervasive element is tiers that award the player with new unlocks...all cosmetic, of course, but in a game where you're engaging in constant repetition of gameplay, changing elements of how you look becomes all the more important.

Each of the main offerings so far do provide some unique features that set them apart from the others. So far, for those I have dived in to, these include:

Player Unknown Battle Grounds: you have a mix of odd vehicles, a scarcity of resources (and bullets), and a hit detection system geared tightly to PC gameplay. Being the first, PUBG's main "feature" was that it was a battle royale game. Since it has been copied, it's the competition that has worked harder to provide unique elements.

Fortnite: The battle royale mode in Fortnite uses the mechanics of the zombie survival fortress building game it spawned from. This means that Fortnite dives deeply into a unique gameplay element that no other battle royale offers right now: instant building tools, all you need is the dexterity of a hyperactive 17 year old twitch streamer, a keyboard, and the inhuman talents of Ninja and you are all set. Despite this sounding negative, the build elements of Fortnite are a big chunk of why the game is so compelling, and I aspire to get better at figuring out how to integrate real time building with staying alive (and shooting other players at the same time). I've seen it happen, I know it can be done....

Black Ops IIII Blackout Mode: Black Ops IIII offers a lot of other gameplay modes, but it's ditched a single player campaign in favor of its own battle royale mode. The key selling point is "like the other battle royale games, but in the Call of Duty engine." The better selling point is that it's a well tuned machine, and it provides you with a pretty decent survivalist playground. It's weak points so far include being very, very glitchy (I sometimes have every other game die on me for no discernable reason), and it's tier advancement system is painfully slow compared to the other games on offer. Also, it's what we got instead of an actual campaign. Sigh.

Which Batte Royale to Play

If you think about diving in to this genre, Fortnite is the no-brainer. They have wisely made the battle royale mode completely free, and you need never spend a cent if you don't want to; thing is, you will like it enough that you'll eventually want to give them some money for those cool models and gear skins that are usually amusing, cool and adorable all at once. Plus....there's a lot to explore and discover in this game, and each season morphs events on the map just enough to keep you wondering where it's all going.

Black Ops IIII is also a strong contender right now, and guaranteed to keep a strong player base being a Call of duty game. However it's budgeted as a AAA title, still expects you to grind tiers to gain unlocks, and then entices you with RMT to buy tiers to unlock. If you got the game for all its modes it would be worthwhile.....but hard to suggest on the merits of Blackout alone.

Player Unknown Battle Grounds is the granddaddy now, but hard to recommend. It's $30 to get in to the game, more if you want cosmetic unlocks, and my experience was that after a few hours of play it seemed to me that the game suffered a lot from being a lower budget design, caters to twitchy shooters with keyboards, and ultimately the simplest way to live to the end was to find a car and drive around until you make it to the final five.

So yeah, I'd suggest that if you dive into this genre you take the safe route and pick up the perfectly priced free version of Fortnite. If you love it enough, then you can dive into one of the others, preferably the one you're going to enjoy the most based on what you like as a gamer....for me that was (barely) Black Ops IIII and even then I feel like I got ripped off just a bit, for reasons I could rant about in another post some time. So....if you must try out a battle royale, my official suggestion is Fortnite.