Prepping for Fantasy AGE, and a Brief Intro to Ensaria 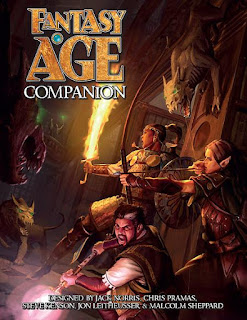 I'm back home after a mini-vacaction to visit family for Thanskgiving, and I've come to a conclusion:

It's time to dive in to Fantasy AGE.....for reals, this time!

I have no excuses....everything that I felt was absent on release with the Fantasy AGE Basic Rulebook has since been squared away with the Bestiary and Companion books. The game now sports 35 archetypes and 10 playable species out of the gate, plenty of optional rules to customize to the preferred play style, more spells, and lots of interesting options to make the game one's own. Also, you can borrow and crib from Modern AGE RPG as well if you want.

This isn't entirely without some competition. I am still delving in to Numenera: Discovery & Destiny, the immense two-volume revised rulebook for Cypher System's far future setting. It's a great setting and system, but I know it will take me a long time to plow through it....and it may still not win out over me simply doing what I feel like with Cypher System's generic version, anyway.

Despite several new books for D&D in Waterdeep and some place called Ravnica, I find myself almost palpably unable to consider D&D as my mainstay any more. I never thought I'd reach this point....but I really do need a break from D&D. A prolonged break. I want fantasy gaming, 100% for sure, but I need it to be a little different from "classic D&D." Unfortunately D&D 5E does "classic D&D" so well that I feel like it is a game about well trod territory. Totally nothing wrong with that....but for me, I want something these days which gives me tools to work with that are new and different. I want a game which directly supports weird, exotic and different concepts, things which you don't find in D&D.*

I'm sure after a break I will be back, though.

It was also a close call with Mythras. But I think Mythras will wait a little longer while I take time to explore some of the sourcebooks available and settle on one to run straight up as-is (either Mythic Rome, Mythic Constantinople, After the Vampire Wars or Luther Arkwright). So, something to look forward to later in 2019, maybe.

But....for now, anyway, it's going to be Fantasy AGE. In thinking about choice of setting I've considered but ruled out my "old faithfuls," because unfortunately they tend to be very much worlds which were built within the parameters of D&D settings, and that's the sort of thing I want to get away from. I want worlds that fundamentally do not assume "D&Disms" on various levels.

I considered taking my long-running blog project, the world of Sarvaelen, and finish it off for proper use at the game table, but I am just as likely (maybe more so) to keep exploring the weird world of Ensaria which I developed at the start of this year for a five part Genesys Core campaign, migrated to a Cypher System campaign that is after 16 sessions still going strong, and have also explored with some random games in Pathfinder 1.0. The core conceit of Ensaria (which I have not posted much about on the blog yet) is as follows:

There are cultures with a belief in gods and there is ancient history but nothing is quite as it seems; Ensaria is at its core a secret "lost colony" of an ancient star empire which was cut off due to an ancient war, which the orcs may or may not have precipitated. The world (called Ansaere) was cut off abotu 27,000 years ago, but it was only the start of the planet's strange history.

The main region of Ensaria (the eponymous culture of same name) are a cluster of city states united by a common cultural pride and a dedication to three orders known as the "Wrotes," which are ancient magical guilds/schools that carry the traditions of ancient magic along with a moral and political ethos. They stand in opposition to other realms such as the Kalazat, a militant, fanatical theocracy dedicated to a monotheistic deity, but torn apart into multiple factions itself about how to revere that deity.

Most species of the world are either humans, human-like beings who may have been uplifted entities from the lost star empire of the old days, or other-dimensional refugees or invaders who got stuck here (orcs and elves notable for this). Some are aliens from other worlds who also ended up trapped her as well.

The planar realms of this world are composites of the "Interstitial Realms" which are sometimes also called the Bleed Between Worlds. It's a space of infinite possibilities and strangeness, through which the actual universes of existence can be reached. Most perceived gods are actually beings from this "space between universes," or from those other universes.

There is a lot more of course, but this is a basic overview of the key bits that make this setting different from other fantasy realms. I think Fantasy AGE could support "weird fantasy with sci fi elements" quite well --see Titansgrave for example; but with the concession that Cypher System does this almost by default! I'll plan to post more soon....and possibly even with dual stats for Cypher System and Fantasy AGE.


*I may write more about what I mean by this in a future blog. But safest to say that it's the tropes of D&D are what has me tired of it right now.
Posted by Doctor Futurity at 2:11 AM