Conan: Adventures in an Age Undreamed Of is now out

Modiphius has released the PDF editions of Conan: Adventures in an Age Undreamed Of as well as the first scenario pack, Conan: Jeweled Thrones of the Earth.

I'm really torn, much as I was with the Kickstarter for this (which, in the end, I decided not to back). The actual final books look intriguing, but people have mixed feelings about the 2D20 mechanics of the Modiphius game system. I have three games from Modiphius on my shelves right now, and they are each ominously large tomes filled with interesting lore and mechanics that just haven't grabbed me: Mutant Chronicles (EDIT: but not Fragged Empire) is definitely 2D20 powered under the special 2D20 mechanic, but the third, Mutant Year Zero, is intriguing to me while still being hard to get in to for other odd reasons.

Honestly, I just kinda like my games to get to the point these days, especially on the mechanics. D&D might be the only exception to this rule, but if there's absolutely one thing I feel every game designer should take away from the OSR design it is that you ought to be able to expalin your game in 100 pages or less....and (again, my opinion only) those rules ought to be easy to find and up front. If you're mixing and matching mechanics and setting too heavily, it can get very annoying.

I'm not saying Modiphius necessarily does this....but given the enormous size of their tomes, it's been too difficult for me to find the time and effort to invest in exploring what they have on offer. Conan may be the first game that necessarily breaks the rule....but I am loathe to buy in to the print editions until I've really figured out if the mechanical implementation is really any good or not. I had read playtest tales that left me more than leary it was not my cup of tea.

Anyway, I may snag the PDF and possibly even just stick to PDFs on this one, if only because it would be interesting to see if I A: did like it with less immediate investment, and B: in doing so, wonder what a challenge it would be to run a game like this entirely from the PDF. Hmmm.

EDIT #2: I picked up the first two books in PDF. It's Conan....I could not resist. I'll try to read up and post details this weekend.

EDIT 3: Goddamnit by Crom I really like this. More soon. 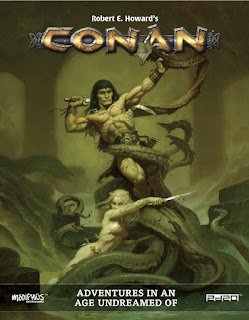 Posted by Doctor Futurity at 1:56 PM