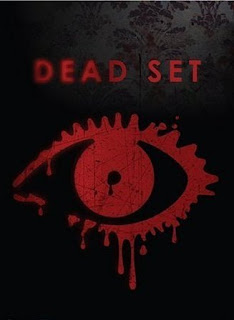 I saw Dead Set a long time ago....apparently before I ever did my first Halloween Horror Month a few years back, because I could have sworn I would have reviewed it back then. Apparently not! Recently it showed up on Netflix, so now you can watch it without jumping through hoops. Originally a 2008 British five part mini-series, Dead Set is a tale of Big Brother's final season, right before a zombie apocalypse descends upon the world to insure that we are no longer forced to endure reality TV shows.....at least, not as living humans.

In Dead Set, the entire cast and crew of the latest edition of the Big Brother UK series is in the middle of the latest "voting out of the house" when a coincidental (?) national emergency descends, catching the revelers off-guard as zombies appear and begin to kill....making many, many more zombies in short order. The survivors consist of a handful of lucky souls and the stars of Big Brother, who isolated in their house spend a full night there blissfully unaware of the apocalypse going on outside. 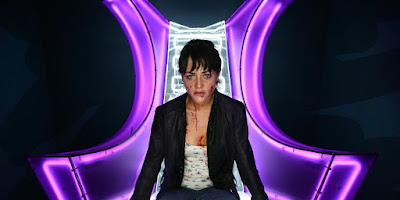 In short order the eclectic range of personalities come to clash, as the narcissistic actors contend with working together as the only reliable protagonist Kelly (Jaime Winston) does the best she can while both she --and her boyfriend-- hope the other is alive somewhere. Eventually their stories converge, but right when it seems like there might be some chance of cooperation and order, everything goes horribly south, chiefly due to the selfish machinations of the conniving show producer.

As you might expect, this is a formula with potential. Zombie films seem to work well when you have survivors who work both with and against one another, and this film is no exception. It plays the apocalypse straight: this is not really a comedy at any point, but it delves into some dark humor on several occasions, and spends just enough time with its five part story arc setting up the characters to all be "just interesting enough" for you to feel bad when they meet their ultimate fate. And yes: this is a good zombie film, one which knows that in a zombie apocalypse, it's never about whether you die or not, but rather when, and what sort of foolish error in judgement brought you to your fate.

The movie seems to shoot for a metaphor, about the show itself and its audience, zombie-like in its desire for more episodes, more dirt on the cast. The zombies of the film, which are done with excellent FX (and some eerily creepy eyes), seem drawn to the Big Brother compound like moths to a flame, which only exacerbates the plight of the survivors. They remain the dedicated fans of the show, just now with an insatiable and very much literal hunger for the cast and crew.

If you've been craving a really good, classic-style zombie apocalypse film be sure to check this one out! I give it a solid A.

1. The fact that it is portrayed as an actual set for Big Brother (so far as I can tell; haven't seen that show in at least 15 years) adds to the verisimilitude of the film, even as it dates the movie a bit. Does this show still exist?

2. Is it just me or does Kevin Eldon (as Joplin) make a great English Steve Buscemi?

3. The film's least endearing moments are, unfortunately, some shaky-cam action sequences, but they work in the context of a film that is 1/2 normal production and 1/2 "found footage" in feel.

4. The two keystone cops who show up feel vaguely like a nod to 28 Days Later or something else I might be missing from British TV.....any ideas?

5. This film sticks with the more traditional "who knows why zombies are here" method of handling what's going on. As such it feels like it could be part of the broader Romero film canon easily, or perhaps displaying a corner of the world in 28 Days Later (though maybe not, as the zombies in Dead Set are clearly actual walking dead types). 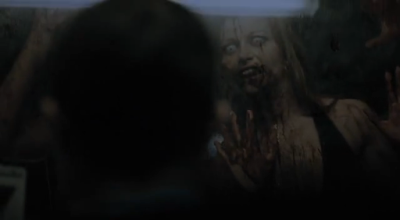 Posted by Doctor Futurity at 12:38 AM