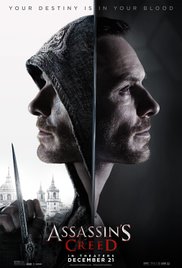 I waited a long time for this one to show up in the dollar theater. The general consensus online seemed to be that it was another "video game to film failure," and that it was otherwise a terrible movie.....barring those who said it was good for what it was, or said it seemed to be fun if you were already invested in the Assassin's Creed games. Being one of the latter I knew I needed to see this, but I didn't want to risk spending full price on a ticket. Plus...this was not the kind of film my wife wanted to see, and too violent (in a muddy gray ethical zone) for my son to watch with me, so that meant I needed to find some time on my own to view the movie.

Now having seen it I have to say I really enjoyed the movie, but completely agree it was a flawed and perhaps poorly conceived effort for various reasons. The movie does delve in to the lore of the Assassin's Creed games, but it does so in an interesting way, where the narrative of the games themselves feed the film without directly relating to it. You have a tale of two ancient orders --the assassins and templars-- feuding over lost treasure of a civilization that predates known history, for example. You have the development of the Animus, which can read DNA that contains actual memories of past lives, allowing a current subject to experience directly the ancestors of his past. This, in turn, puts the crux of the story on the modern individual subjected to the Animus by the templar-controlled Abstergo Corporation, which is using said assassin descendant Cal Lynch (Fassbender) to explore memories of a time when an ancient artifact, a so-called piece of Eden, had been found.

From there it's a movie steeped in "grimcool" which is the only term I can use to describe movies like this right now.....and interestingly it seems to me that most movies of the last few years that are excessively "grimcool" seem to be doomed to box office failure. Too much effort at making everything in this fashion appears to be an audience turn-off.

The movie also seems to sacrifice the core conceits of the film, at least stylistically, for the sake of doing something more visually enticing. The Animus machine, as an example, is basically a "plug in and tune out" experience in the game, where you lie down and the machine constructs something akin to either a virtual hallucination or a lucid dream experience. In the film it's a giant arm that grabs Cal  uncomfortably around the waste and then moves him around in conjnuction with his memory experiences, which makes for a cool cinematic effect but...well....the problems with this approach are made obvious as the film progresses, and it is clear that Abstergo's mad scientists are playing with fire and are frequently burnt.

I could go on for a long time about little technical issues like this, but the film has more pressing concerns. Here's what they are (spoilers ahead):

1. The movie suffers from being so deeply immersed in the moral grey zone that the only ethical dilemna we are allowed is whether to side with the murderers because then at least we retain free will, or side with the spooky suit and hood wearing templars, because at least they intend to stop the murderers, even if it means stripping humanity of free will in some somewhat undefined fashion using the piece of Eden.

Or put another way: there were literally no good guys in this movie. Even the video games generally allow for you to feel justified in taking sides, and paint the templars as (usually) unremittingly evil, and the assassins as driven but flawed antiheroes.

2. The movie spends a lot more time in the present than the past. We get a glimpse of a fascinating Spain in 1492, but we are not given nearly as much of it was we will realize we wanted.

3. When things finally come to pieces and the assassins break out of their controlled prison, they do it really easily. How did Abstergo think that leaving so many antique assassin weapons on display was a good idea? How did they not have better measures in place for this? If we assume that this movie is in the same continuity as the games, then hey have ample reason to believe that this sort of shit can and will happen.

4. A person watching this movie who is not a fan of the series will leave wondering why everyone was so worked up over a round ball-like thing that glows a bit. We never got to see the Apple of  Eden do its thing, as the games are prone to demonstrating. The movie also made precious little attempt to clarify exactly what the Apple of Eden was for the layman, which is a shame, since I suspect we won't see more AC movies.

5. We saw leaps of faith start, but not end. Were they just being coy about the reality of the physics of landing in piles of hay, or was there some other reason not to show this? The rest of the movie did a surprisingly good job of making the assassins look like their parkour hurt and took a lot out of them.....a welcome change from other recent movies I've watched. So why balk at showing the leap of faith landing?

6. This movie really should have started with a retelling of the original Assassin's Creed (imo) but clearly it felt like a decision was made to both progress the story where it currently is in relation to the games and also stay the hell away from Middle Eastern assassins as main protagonists. A shame. I can't fault them, but it shouldn't have to be this way.

7. If you saw this movie, can you explain to me WHAT THE HELL HAPPENED AT THE END???? So Cal just wanders in to the highly secure Templar symposium, ganks the CEO, takes the Apple of Eden, and walks away while the crowd files out as if they expected this to happen all along, without even some shot showing him being chased by pissed off Abstergo guards? WTF???? I really didn't follow the logic of this sequence.

8. Oddly, I really expected to see a five minute monologue between the assassin and his victim after each successful murder. Yes it would have been narrative madness, but too many years of AC games have taught me to expect this, I guess.

9. I wish the Spain of 1492 in this film had been presented in a game. I want to explore that madhouse that the film lets us barely glimpse.

Okay. So I did enjoy this movie but was disappointed to see the choices made in producing the first AC film (and probably only AC film) to appear on the big screen. I'd give it a solid B for being a decent effort, but I also am disappointed because I think with a better script and some reconsideration of the core particulars of what makes this franchise most interesting, it could have been an A.

Posted by Doctor Futurity at 1:33 AM