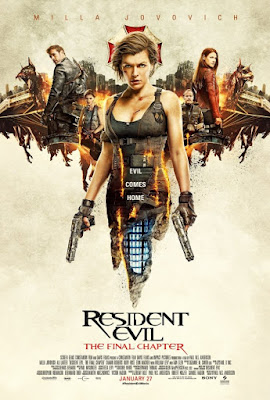 This is a good week to be a Resident Evil fan. We have a new entry into the game series (RE7) that is genuinely amazing....more on that one later....and also the final movie in the "Alice's adventures in Umbrellaland" series of Resident Evil films starring Milla Jovovich.

I've had a great deal of fun with both the films and games of Resident Evil over the years, and always appreciate that the first RE game marked my foray into "modern" gaming on the Playstation 1. Prior to that, it was a wasteland of suboptimal, graphically terrifying PC games for me, and in fact the PS1 was my first machine that could run anything interesting at all, as well as my first console since my childhood Atari 2600 days. This year in 2017 marks an interesting transition for the franchise, which, like the monsters it portrays, has grown in strange and weird ways. Resident Evil: The Final Chapter is no different, offering up a movie that closes out this chapter of the franchise while RE7 opens up an entirely strange and new direction for the games.

Unlike the last several Resident Evil movies, the latest film isn't nearly as campy and stupid, making it hard to poke fun at the film. In fact, if you hadn't seen any of the RE movies since maybe #1, this film could arguably stand on its own....so long as your entire focus is on enjoying a zombie apocalypse film that keeps making allusions to prior events. They give you a decent enough recap at the start, and even fill in some odd holes from the dawn of the series (the kinds of holes this series takes for granted, normally), and then dives in to the current plot. In fact it even eschews the traditional "wrap up the ending of the last film" format by cutting to the chase....we know there was a crazy battle in the ruins of Washington DC but the film starts more or less "the day after" that fight, and moves in to Alice's last trip down the rabbit hole.

I'll get this out of the way real quickly: much like with xXx: The Return of Xander Cage, Resident Evil: The Final Chapter is actually a lot of fun and quite enjoyable, so long as your in to that sort of thing. Which thankfully I happen to be, because otherwise I'd be having a real crisis of confidence in the state of films right now if I didn't. They are both action films predicated on the glory of on-screen excess and madness that is particular to their action-film visions of the universe. They both rely on spectacle over plot, action over story, and the "doing of stuff" over character.

Alice is promised an end in this tale, a conclusion to her story, and we do get that. I am kind of hopeful that this means we might eventually see a series reboot which tries to tell a RE tale closer to the games....but then we get into that tricky gray area where we have to admit that the games have their own special world logic, pacing issues, character development failings and weird plot holes (though none quite so spectacular as the films in aggregate).

The storyline of The Final Chapter wraps up Alice's tale (more or less), brings back Claire, brings back (no surprise) Wesker (and also wraps his tale up), along with gratuitious appearances by all of the Umbrella evil gang....especially the Red Queen and Dr. Isaacs, who's been "dead" for a few movies, actually. It does not clarify what happened to Leon Kennedy or Ada Wong....but I'm not fretting, their arbitrary appearance in this franchise remains one of those "visual nods" to the games without much effort to explain their existence in the weird mirror universe of Alice.

Here are a handful of my spoilerific observations on this movie (yes, SPOILERS AHEAD):

1. For much of the initial scenery this movie looks like they took a tab from Fallout 3's style.

2. As the plot progresses and it is revealed that the entire cabal of Umbrella is cryogenically locked away for awakening after the apocalypse ends, many "motivational" plotholes get nominally filled. This is good! Also, judicious use of clones to explain motivations, appearances, and reappearances was sufficient to help clear up some old (and new) plot detritus. But some of the motivations of prior villains in other films are suddenly cast in to doubt. Why, for example, did Wesker do pretty much any of the stuff he did in prior films? Why was it necessary to wait ten years to release the anti-virus? Why--if near as I can tell that was the goal all along--did anyone left at Umbrella oppose Alice's desire to do so, if it insured they would awaken to their brave new world?

3. Who set the bombs to blow up the cryotubes? I might have not followed this properly, but I was under the impression that no one had a good opportunity to do so.

4. Wesker died like a dog in a trap. Seemed like an oddly fitting end for Movie Wesker, but entirely out of sorts with the vicious mutating Wesker that haunted the video games.

5. I thought the Isaacs clone was motivated to cast down the Umbrella elite, knowing he was a clone. But in the end he seemed genuinely surprised to meet the Real Isaacs. So what, then, was his actual motive for baiting an army of the dead right to the entrance of the installation?

6. They try to clarify that the infection of the world actually started deliberately....but it doesn't quite jive with the first couple movies. I guess it explains how a post-nuked Raccoon City wasn't the source of the infection evident by the time of "Resident Evil: Extinction" but in fact it was Umbrella Corp deliberately infecting the population.....but at the same time, the prior movies held up on their assumptions just fine without this extra layer of Machiavellian scheming.

7. Do you remember the names of anyone else in this movie other than Alice, Claire, Isaacs and Wesker? Me neither. The entire population of survivors were pretty much just there to have a "visual recognition" and then their moment of doom.

9. That anti-virus sure did disperse quickly. Like....insanely quick. But this is RE science so yeah. They kinda clarify it will travel on the winds in the end, but that only lampshades the whole "army of zombies fall over" scene just prior. I guess the army was downwind?

10. I am officially impressed at how many frickin' times that laser trap corridor has made an appearance in the movie now. Officially it is like a character unto itself. The laser corridor is to RE films what the Necronomicon is to Evil Dead movies.

11. Fridge Moment: even if they were evil, I bet a fair number of the Umbrella elite would have been very useful alive to help rebuild society. Then again.....I guess they did cause the apocalypse....

Okay....so this was a fun movie, slightly less stupid than the last three, and slightly more energetic than many zombie survival horror films out there. It was all about the action, the LOUD NOISES as zombies pop out and the monsters. Also, a promise I think from W.S. Anderson to his wife Milla to get her off the film sequel treadmill she's been trapped on. To that end, a solid B+, for a solid B Movie!


Posted by Doctor Futurity at 5:00 PM