13th Age doesn't really support dual-wielding combat (fighting with a weapon in each hand) unless A: you have a specific power/trait/ability that is designed for it, or B: you roll a 2. This has never quite felt "right" to me, so I worked up a new dual-wield basic attack option as follows:

Melee Basic Attack (two weapons)
Treat this as a normal melee basic attack but with a -2 penalty to hit. If the attacker rolls 16+ and hits, then in addition to the normal damage dealt with his primary weapon (modified by level/tier, of course) s/he may add one damage die of the off-weapon type. So for example: the attacker is wielding a long sword (1D8) and dagger (1D4). If he is level 3 and gets a 16 or better hit in (with the -2 penalty), then he may roll 3D8+1D4 damage. The bonus damage for the off-hand weapon jumps to two dice for Champion Tier and 3 dice for Epic Tier.

This combat attack can only be executed with one-handed weapons, and the off-hand weapon must be light (one damage die less) than the main-hand weapon, or two light weapons.

Adventurer Feat: you no longer take a -2 penalty to the attack.

Champion Feat:  you may now wield two one-handed weapons of light or medium size in any combination (i.e. two long swords, for example).

Epic Tier Feat: you now deal off-hand damage if you roll 11+ and hit the target. 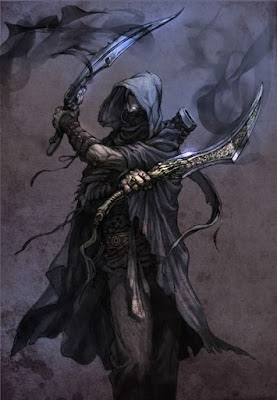