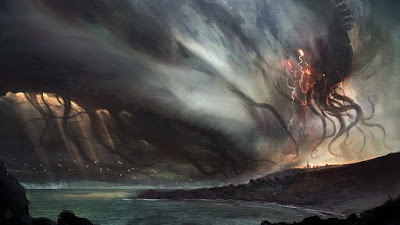 This weekend kicked off a new Call of Cthulhu campaign, using 7th edition rules. I wasn't quite feeling as prepared as I wanted to be, but it turned out the transition from 6th edition mechanics to 7th edition less onerous than I had expected, and some of the new editions changes are rather nice. It was nice to get back to gaming on a Saturday, been a while!!!!

There hasn't been any combat yet, but I'll let you know how that goes when it rolls around. Like any good CoC session, the game I am running will require some work on the players' part to investigate the mystery before they finally dig too deep and get into horrible trouble. During char gen it was fun watching them arm their PCs.....only to realize that hauling all that firepower around means most of it will spend all its time in the trunk of their car under various safety locks (we're running a contemporary setting campaign).

Meanwhile, the new percentile focus on attributes was smoother and more natural than I anticipated....given that it's simply a move to converting the existing attribute-derived rolls from prior editions into the default mechanic, it actually makes a great deal of sense, and after only one session feels quite normal to me. One of the reasons this works better than in prior editions, for both attributes and skills, is that the system now pushes everyone to note a "half" and "fifth" modifier for their base skill. These are for hard and extreme tasks/successes, and basically it bakes in a quick target number on the character sheet for PCs to aim for. This is an easy tool for the Keeper to use.

Some things I wouldn't have minded seeing an improvement on (such as adding a perception skill over spot hidden, listen and such) aren't present, but the skill set remains more or less consistent with prior editions.

The luck score was an oddity. We discussed the idea of such metamechanics, and I acknowledged that the way it was presented in CoC 7E seemed okay to me....you lose the points in luck you spend to influence rolls, and regain them when you make successful improvement rolls on luck.

Speaking of which, improvement rolls are now on D10s, which seems excessive to me but the game clearly identifies that no improvement rolls should be done until after a completed scenario. This suggests to me that improvement rolls ought to hit once every two to three sessions, which is typically how long an average CoC scenario takes if it isn't a mega-adventure or a one-shot.

The Keeper's Book otherwise remains thoroughly utilitarian, and does have just enough info even on character creation that you can run with just that book, if no Investigator's Guide is available.

Anyway.....goal here is to run CoC 7E for the foreseeable future on Saturday, maybe rotating with Savage Space. More to come!

Posted by Doctor Futurity at 8:47 AM