Savage Space - The Cyndaar Arrive, Hard Light Technology and more on the Eidolons 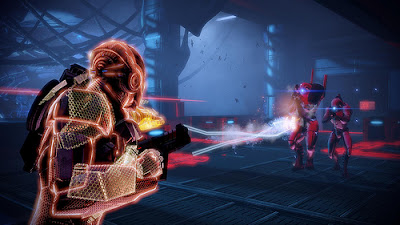 It finally happened....the Cyndaar made their first official appearance in the Savage Space campaign over the weekend. An ordinary Cyndaar of no special import kept six heavily armed and armored adventurers occupied quite nicely, as they learned that the only reason they could harm the Cyndaar at all was thanks to special bullets provided to them by their enigmatic benefactor, the Eidolon guardian named Susuros. These "Fibonacci Bullets" or "F-Bullets" apparently created a micro-singularity in the fabric of space and time, hemorrhaging normal matter into the fifth dimensional space from which the Eidolons pull their hard-light technology. 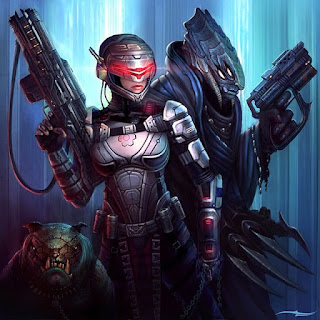 This property converts ordinary gear in to hard light technology, and is only available through ultra-tech civilizations. In principle hard light technology is a matter-energy conversion process that seems to defy a few physical laws, but those who have mastered it (such as the Eidolons) claim that they have found a property of fifth dimensional space (one of the folded dimensions) which allows them to create objects which are simultaneously in a state of energy and matter....superpositioning of matter and energy almost as if it were a quantum effect (comparable, perhaps, to the quantum state of being both a particle and a wave). In the 28th century of Savage Space's Commonwealth the best physicists in the galaxy do not buy this explanation....but that's also why the Commonwealth has no super ultra-tech beyond the examples the Eidolons demonstrate.

For game purposes hard light tech is a trapping you can apply to gear, including weapons and armor. The object changes from its normal properties in to a hard-light creation. Such devices are represented as small disks, normally incorporated into clothing or a gauntlet (the Eidolon preference), which when activated create the desired object immediately.....including clothing or armor, which manifests around the person almost instantly. While "off" the discs occupy minimal space. As an action the device can be activated, which creates the hard light version of the device....and this version functions exactly as the original, except with half the weight, and an almost unlimited level of customization in terms of appearance and color scheme. One can make the armor look as "normal" or fantastical as you desire....the properties of hard light tech are not limited to looking like ordinary matter.

Hard light devices can be fractured and penetrated but even if broken will be restored within 1 hour after deactivating the disc. Only by actually damaging the disc or being hit with disintigration effects can the hard light gear be permanently damaged. Targeting a disc is equivalent to a called shot to the head, but with no damage bonus; the disc is protected by the armor of the bearer plus a toughness of 10.

Hard light power armor is perfectly feasible. Any power armor with this property is obviously almost priceless, but they still need to be "programmed" to reflect the build/style of the armor (see SF Companion for those rules). Such programmed armor can later be changed (options swapped out) but reconstructing the design takes 1 hour of programming and a Computers skill check. 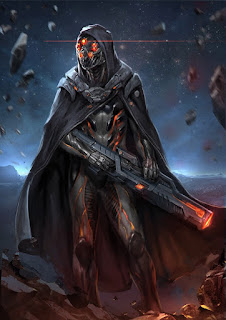 Eidolons have created entire starships made out of hard light tech. Such vessels appear to be limited to single-person fighter craft, but the Eidolons utilize hard light GAI (general artificial intelligences) to manipulate larger scale ships; their technology has all but eliminated the need for more than one crewman...the eidolon pilot. With this technology you can literally carry a battlecruiser on your gauntlet.

Hard light technology has been incorporated into the lost tech of the ruins throughout the Eidolon Expanse. Whether it is used for buildings, bridges or even constructed robots and drones, the technology allows almost energy-free creation of all levels of simulated artifacts and constructs. Constructs (robots) created in this manner are treated like normal for purposes of statistics, but they do have the protected "center" which is usually a small hover disk with drone-like properties of self-flight (Pace 8) that can be targeted with a called shot (at -4) to damage directly.

Susuros, a guardian Eidolon trapped on an unknown world in the Coreward Expanse has stated that the hard light tech should not be thought of as "machinery" but rather as something grown....almost organically, out of sentient substances from the fifth dimension. He elaborated only to suggest that the hard light tech is manifesting from a fragment of a grander entity in fifth dimensional space, something which appears to violate physical principles of matter and energy conversion in ordinary four dimensional time-space to us, because we are incapable of conceiving of it's existence in any other matter.

Hard light technology is not inherently resistant to the dark matter attacks of the Cyndaar, but it can be used to create psionic dampeners, which can be extremely helpful against such non-baryonic entities. Unfortunately it is extremely susceptible to gravitic weaponry, about which more will soon be revealed....and the Cyndaar in the deep Coreward Expanse worlds have begun to create such weaponry. When hit by weapons with gravitic properties the hard light armor loses all armor points, and is -4 on any vigor rolls if a construct. Even one wound dealt to a hard light creation destroys it.

On the other hand, the aforementioned F-Bullets --Susuros jokingly called them Fibonacci Bullets because he explained that the bullet initiated a form of fibonacci sequence which "dragged the ordinary matter of your universe in to fifth dimensional space, following the principles of Fibonacci's unique sequence." In fact they seem to create a sort of unique singularity which does exactly that, creating a microscopic wormhole which does indeed have a disintegration effect as it's local mass is drawn in to curled fifth dimensional space and presumably destroyed or assimilated.

Mechanically the F-Space bullet can be applied to any ordinary bullet, so the weapon of choice must be some form of slug thrower. The bullet appears to be an unstable hard-light construct infused with a variation of hybrid strange matter. When the bullet hits a target it deals normal damage, but is AP 12 against all normal matter and completely ignores AP from hard light armor. The damage dealt is treated as a disintegration effect, and the target, if it takes even one wound, must immediately make a vigor roll or perish, sucked in to the void of fifth dimensional folded space. These bullets are, needless to say, incredibly rare and only the Eidolons know the alchemy necessary to create them (but more on the arcane talent for Hard Light Tech later....) 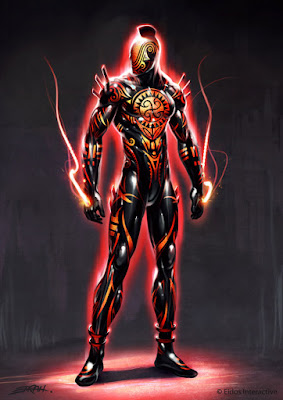