Notes on the Savage Piracy Campaign (in the rough)

For this campaign we're using the Explorer's Rules with the Pirates of the Spanish Main as the baseline. Rather than remove Guts I am letting it remain a skill per PotSP but it will automatically equal Spirit, so no points need be added.

For SW Horror Companion everyone can use any of the new edges and hindrances listed. Some of the racial options are permitted with the caveat that you are probably unique and/or very rare and hidden among men....this is the "real world" of the Spanish Main so monsters walk hidden among men, and exposing oneself to the public as a monster leads to a mob of peasants hunting you down with fire and pitchforks.

That said....I would prefer if the party were 95% human, but if someone wants to entertain a nonhuman choice, here's the races I'll allow, with notes, include:

Angel: the only angel on record is possibly Joan of Arc, but if a player comes up with an amazing reason why an angel would be pirating I'll at least listen to it before shooting it down.

Demon - in the Spanish Main having a demonic element means you are one of the following:
1. possessed or haunted by a christian or pagan spirit
2. a changeling of some hideous sort
3. possessed by a vodoun loa

Dhampyr: perfectly permissable but remember its really sunny in the Caribbean. Vampire sire would either be old world (European in origin) or new world (Mayan/Aztec in origin)

Patchwork Man: I love the idea so if someone can think of a suitable backstory to suggest why your pirate is a patchwork golem in 1700 I'll consider it.

Phantom: conceptually sound but may require some thought on how you will interact the the world and your party. Not probably a good choice for a setting with an emphasis on swashbuckling.

Werewolf: great idea and thematically fits well with piracy, but such a pirate may need to take special efforts to handle his lunar transformations when out at sea....

Zombie: perfect choice for those willing to work with the severe limitations! 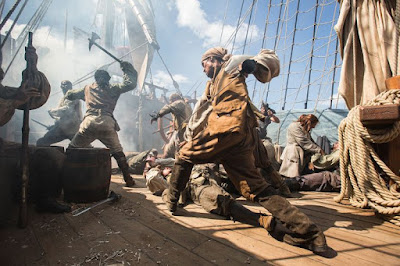 You'll want to pick your homeland, but make sure everyone speaks a common dialect. England, Spain, Portugal, France and elsewhere are all advisable. The Colonies is also cool. Want to be a rogue Amerind who's pirating? Sure, why not. Keep in mind in this time period England and Spain have a great deal of animosity, and for campaign purposes the Spaniards are Real Bastards.

The actual frame of time for the campaign is April, 1718. Blackbeard is contemplating retirement from his short but fierce career. Other contemporary (living) pirates are numerous but this time period between 1718 and 1722 was when most of them eventually run in to their ugly fates, a perfect time to both meet some of them while allowing your intrepid crew to become the next vile pirate legend! In 1718 you might have met or had connections to Anne Bonney and Mary Read serving under Calico Jack, Bartholomey Roberts (who's career is just taking off), and Stede Bonnet.

Henry Morgan has been dead 30 years and his grave lost after a mysterious earthquake swallowed up the cemetery where he was buried in Kingston Harbor, Jamaica just four years after his death.

The adventurers are all in the pirate haven of Nassau when the campaign opens up. Nassau is currently a lawless port without even a governor, a safe harbor for pirates and buccaneers. This is about to change, but for at least a few months life is still good in the beloved freeport....