Random excerpt from the many locales of Enzada I have floating around: 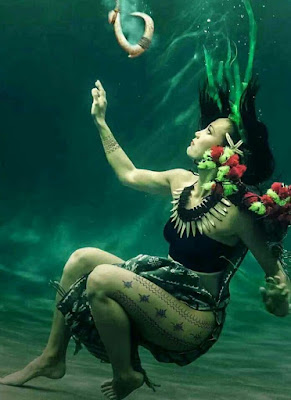 Named after the god Etroniak, who was said to have held up the very sky itself against the creature known as the Pale, until he was smitten by the siren Erephetine, such that the Pale was able to strike him down with a terrible wasting disease. The Etroniak Ocean is said to contain mysterious phenomena, and ships often disappear while traveling its vast gulf. Sailors say at its deepest is a miles-deep trench, the bottom of which holds the ancient tomb of Etroniak himself.

Mythology aside, the Etroniak Ocean is a dangerous place to cross, with storms so violent that most ships seek to travel the ocean during the calmer months and avoid the storm season, which fluctuates wildly. Those ships forced to travel during the dangerous months hug the Merillian coastline, and risk other piratical dangers instead.

Aside from the storms, the Etroniak Ocean is said to contain many strange phenomena which are attributed to all manner of sources. Planar rifts have been known to open on the waters, allowing passage of unwitting ships into other dimensional realms. Occasional ships will appear which have mysteriously been abandoned, and more than a few vessels tell of tales fighting incursions of Kuo Toa seeking to drag the sailors and their cargo to watery graves. Sirens, sea serpents and mermen are also frequently encountered in the Etroniak Ocean.

Deep in the heart of the ocean is a small chain of islands known as the Hamalapi Isles. These islands are the eastern tip of what may be a larger land mass to the west, but none can say for sure. The Hamalapi Isles are populated by exotic humans and demikin who speak no language familiar to the people of the east, nor do their gods bear any resemblance to the Enzadan gods. The Hamalapi have coal black skin which they accent with white and red tattoos, and they worship immense, ancient stone idols which appear to be similar to those found in Aquare and the Island peninsula of Sartoriam to the north. If this is true, it means that a very complex ancient civilization once populated the western isles and reached as far as the coastlands of Sartoriam, and then vanished. The Hamalapi insist that these were the Ancients, whom they call the Mai’akas, and that the Mai’akas were here before the Sky builders. The cultists of Pytharos affirm this to be true, and like to point out the oddly reptilian nature of the iconography of these ancient lands, as well as the fact that every single location with such ruins always has serpent and lizardmen living nearby. 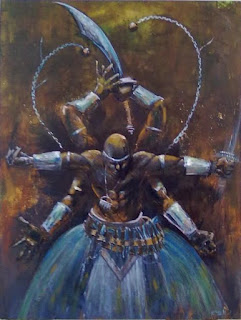 On the southern coast of Sartoriam, at the southern end of the Straights of Etyri rests a modest port city which is ostensibly a Freeport ruled by the Datu Enampar, and it is regarded as the second distinct “kingdom” of Sartoriam, with the other being Aquare in the north.

Raspirion is distinct for having a small number of Selindari expatriate families in the area, who settled here two centuries ago and set up business ferrying mercantile goods from north to south and back. These families have prospered, and their recognition as merchant lords in the south as reaffirmed over time. Despite their hewing to Selindari tradition, Raspiri culture has had an influence on the families, and the result is a unique blend of he island culture of Sartoriam with southern Selindari tastes.

Locally people believe in seven sky gods whom they call the Fatudar, and that each sky god is an embodiment of part of the humans spirit. Because of this, the cult revolves around the notion that attitudes and emotions can influence the sky gods and in turn the sky gods display this emotion in the weather. The cultists seek to provide cultural “guidance” to the local people on how and when to display emotions so as to not upset the gods when it is bad. Inevitably sorcerers and warlocks are blamed when the gods show wrath in the form of storms, sleet, snow and even the fires of volcanos, which are rife in southern Sartoriam.

Year round it is easy to see why  the Raspiri believe the world is dominated by fickle sky gods. The summers are hot and humid with terrible summer storms, and the winters are deadly and cold with island-covering blizzards. The weather of these northlands is a mixed pot year round. 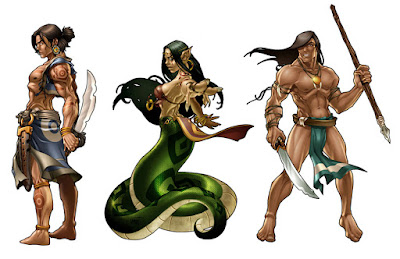 Plot Idea: The Warlock of Karnoven

Raspirion is having some horrible weather. A blizzard in summer has led many to suspect witchcraft. Friends of the Spirit of Elinzada’s captain Humalapar in the Selindari quarter of Raspirion, represented by the noblewoman Ahadana Muquiroy have asked that the adventurers look into the causes. The crowds of the city are already convinced it is the new cult that set up shot last year just north of town in the high mountains of Magge, where they say the cult leader, a man named Vormagask has been luring young people away to join his cult.

Investigating the cult reveals some interesting details. The cult is actually a group of Jainists who have traveled north to avoid persecution in the south (where Jainism is regarded in many lands as heretical). Vormagask explains that he was a pilgrim of Dasam when he was revealed the truth on a pilgrimage to the ruined capitol of ancient Draath. The first Jainist to achieve immortality through faith, Emparas, revealed to Vormagask the true path to enlightenment, and told him to seek the Jewel of the North where he would find the tomb of Adante, an ancient Jainist who would reveal more. So it was the Vormagask claims he arrived in this land and set up his temple in the Magge Mountains while searching for the fabled Tomb of Adante.

About three months ago he concedes that he found the tomb, and they excavated it and dug out the entrance. Within he found the perfectly preserved form of the jainist priest Adante, who had the visage of a main cast in still-life, but with wild hair and nails. He was awakened, but at this point Vormagask is reluctant to say more. Prodding him (Persuasion DC 15) will reveal that he witnessed something horrible and disturbing, but he could not say more, other than that the ancient ascetic fled deep into the tomb, and injured one of the cultists as he did so, Vormagask’s daughter Emetri.

Emetri
Emetri is being held in the compound in a special room; she was touched by the “tentacles” which erupted from Adante’s body, and she is now changing into a hideous beast (she is now morphing into some sort of devil). She can still speak, but will at some point go into a rage and attack. Before doing so she will shriek that Adante knew not what he did, and that he drank of the Fountain of Stars, at the foot of the Slumbering form of Drod, the Star God. In that drink he imbibed the very physical manifestation of pure knowledge, and it corrupted his physical form forever more…..he was no longer a jainist, he was now a star spawn.

The Tomb of Adante
The “tomb” is not so much a place of burial as a prison to keep what Adante became in. It was forged out of the entry to an ancient tunnels, which ran deep into the earth. The tunnel opened up into a vast, ancient basin deep within the isle of Sartoriam where an unbelievably old prehumen city could be found: the abandoned city of Karnoven…..the other followers of Adante, realizing the horror that befell their leader, sought to inter him in this domain and to serve as a warning. They continue to populate the city, all eight of them, now mummies….their Jainism a “partial” success.


Whoever lived her did worship Drod, as the immense idol and ancient temple suggest, but the rest of the city is clearly not only of nonhuman origin, it even seems to predate the rise of the serpent men. Ancient and terrible immortal beasts stalk the city streets, but there are many terrifying mysteries as well, including the enigmatic Fountain of Stars, which can bring forth unspeakable knowledge and changes all at once on those who imbibe from it. In addition, the ruin is occupied by a degenerate race of grimlocks who serve the mind flayers that act as the final priests of Drod, led by the elder mind flayer lord Quaast. 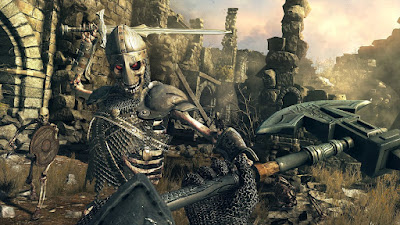