Starfinder: The Claw of Trikaros (scenario)

I ran this scenario as an opener a while back to my last try at a long term Starfinder campaign. As it looks like that is indefinitely on hold due to the same issues I keep running in to with Starfinder, thought I'd drop the opening scenario notes down for those looking for some inspiration....these are the original notes; my actual play session staged everything as starting in Absalom Station and then was modified a bit to segue into the "Fly Free or Die" AP. This scenario can provide a one night session for Starfinder and might be modified for other SF RPGs with weird elements. 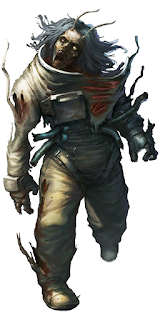 1.      The group has possession of a Kevolari Venture thanks to an enigmatic patron called Logos. Logos has requested that they work for him/her in exchange for the ship and a measure of freedom; each has been cleared of recent crimes. For the first mission he notifies them to help out an old friend.

2.      An old friend, Devon Mursk (human, Operative, Level 2) has asked the adventurers for assistance. They are asked to meet him at a specific coordinate, to pick up a special cargo including himself and three guests, no questions asked. The gig will pay 10,000 CR for a no-questions-asked transfer from the location on Pillar’s Way, the ancient orbital platform built around Klassikon, a Quarantined World said to contain nether rifts to the Abyss.

3.      As it turns out, the group finds out that the coordinates take them to a vast ruined temple-fortress on the surface of Klassikon, a fairly contested region, before a lost temple of the Church of Kazon-Dezak. The group finds the four pickups en route from the maw of the ruins, pursued by a suit of Animated Lictor Hellknight Plate and a horde of skeletal undead.

4.      The actual fight: group can’t target weapons from the ship as they are too close and will kill the clients. So! Fight at the ship’s boarding ramp: 5 rounds before the animated hellknight armor arrives, attack consists of: 6 skeletal undead. Countdown to Hellknight appearance 5 rounds. Group only needs to get group on board with supporting cover fire to escape.

5.      As group lifts off, an ancient buried landing platform is revealed by parting dirt and stone and a horrifying derelict ghost ship emerges, a lost relic ship of the Crusades! It’s undead (use Blackwind Sepulcher); group can make piloting rolls through the Pillars of Fire Nebulae, which cause the ship to combust due to its leaking Rift Drive.

1.      The group is now asked to deliver the gang to the Moonworld Korus around the Jovian Giant Silver I in the Silver Star System (5D6 days to get there since it’s jumping to a new system). The four include friend Devon, but he looks….sick? They have a locked crate and the other three refuse to remove their combat E-suits, even with signs of injury. They seem content to park themselves in the cargo hold of the PC’s ship and wait patiently.

2.      Secret: the three are named Zalon Tass, Fegar Rohn and Saita Desainte, they are each lacedon ghouls and are in the service of the Dark Star Pact, an order which works to awaken the Aquatic god Trikaros, which the believes rest in the ancient cities beneath the waters of the moon Korus. They worked with the human Devon Mursk to secure a lost artifact called the Claw of Trikaros which is thought to be a key that will open the doorway to the prison vault of the ancient god, but they need a live human to do it; using the key turns you into a ghoul. They have noticed however that handling the artifact has affected Devon Mursk in some way….he is acting strangely.

3.      Each day of the trip for the next seven days people may notice Devon acting strangely, including him attempting to access navigational logs. On day seven he makes a move: he sabotages the drive and it forces the ship to drop out of the Drift. Devon then inexplicably seizes the Claw of Trikaros’s case and attempts to eject himself and the claw into space through the airlock, possibly with a shuttle if available. The ghouls try to talk him down, but realize he has been overcome with something strange madness….secretly, a Yithian named Vector has reached into Devon’s mind to steal the device! He has been waiting for the ship to reach the right location in space. A deadworld, adrift in space called Traxion holds the secret lair of this Yithian, who intends to retrieve Devon, his puppet, with the artifact.

4.      The Yithian has sent a ship, Multifold G7 Autohauler, equipped with two space-ready Observer Class Security Robots and one reptoid named Talon (disguised as a human woman) who serves as the Yithian mind vessel. They insist the group allow the safe transfer of Devon with the artifact. Presumably a shoot-out ensues, but the Yithian will promise to double their pay (20,000 CR) for the release of the artifact. The ghouls will get violent if the party agrees. If the group seeks to consult Logos they find the comm array cannot locate any signals in the dead of empty space. 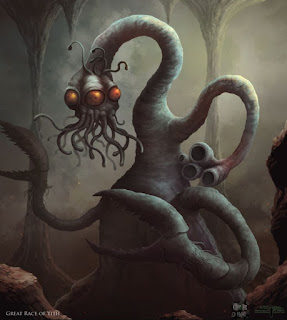 1.      This plays out in two ways: group arrives at the moon of Korus and lands on Dragon Corp. Mainstation where they disembark and part friendly ways with the ghouls. The enigmatic benefactor, Logos, manifests and congratulates them on the task, but then explains new tasks are yet to come….

2.      If the group reveals to Logos their sale of the artifact to the Yithian, he says that he regrets that their contract must be terminated…no pay, and the docking bay locks up! They have been reported for working with agents of the Dark Star Pact, and authorities are on the way. Group can try to hotwire the bay doors on their Mainstation hanger and blast out of there.

+200 XP if they did not give the relic to the Yithian.

Posted by Doctor Futurity at 10:15 AM