Video Games Musings from the Deathbat - Destiny Beyond Light 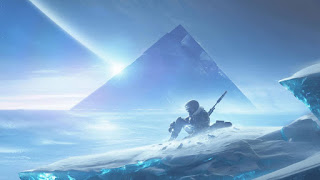 As a writing exercise I realize I could talk a bit about what video games have been consuming some of my time lately. After recovering from a bout of a totally normal and not at all COVID-related stomach bug (than goodness for ordinary old fashioned familiar viruses!) I had some time to plow through a bit of gaming. Sunday I spent time with Destiny Beyond Light, focusing on completing story arcs and trying to learn how the game expects me to advance the season pass.

Destiny 2 is a weird game, in that it's now been chugging along with its identify crisis since the original game, trying to figure out how to do what it wants to accomplish without seeming to always know what that is. The recent switch to Beyond Light "vaulted" a bunch of content, too.....shining an unfortunate light on the problem of Games as a Service models, in which it is possible now to be a Destiny player who has no clue what the Red Legion campaign was all about, the pivotal campaign that kicked off Destiny 2 as its own thing. At least with the original Destiny you still have a solid story arc from the Black Garden to The Taken King and all the way up to Tide of Iron (iirc), meaning that the first major plot arc of the Destiny universe exists in a tangible way....but then everything after that up to about Shadowkeep is just....gone. It's weird, and its also a real shame.

Some of the Destiny Beyond Light model is about offering a plethora of ways to play. For the first time ever I tried the Gambit mode and kind of liked it (but not enough to care to play it obsessively). The style of Destiny is a tough sell on repetitive content, for me at least; I am not overly motivated by seeking out rare items or some sort of achievement based game cred, I just want to enjoy the story parts. The story parts are at times integrated with some of the multiplayer content (strikes and raids) and so I will put up with those as needed, but the incessant desire to play the game on its own merits is severely tempered by a desire mainly to experience as much of the story as I can.

Unlike the original Destiny or even the initial offerings of Destiny 2, it's harder to find those story pieces. The game provides them, but often they are muddled a bit with the regular game content; I have seen enough Destiny content in general to notice that there is a lot more "recycling" of areas in the story and later gameplay than is normal, even for Destiny, which is a shame. The main Beyond Light campaign, for example, had me ping-ponging between about four areas fairly constantly, which is a real shame....especially given that they chose Europa as the backdrop for this tale, which is presented as a frigid ice world (as it should be), with the relics of a lost city that may have existed before the terraforming reversed during the collapse. This is cool if its one of many settings, but they got rid of several other worlds in their vaulting of content, leaving us with the dull grey moon, the dull icy Europa, the dull cream-and-yellow colored Nessus and Earth with its two zones. Destiny's devs did this vaulting to reduce file size, but I sort of feel like maybe their game needs the larger zones, you know? Maybe they can look at other ways to handle their content size, maybe allow people to load certain things and not others; I don't play Crucible and Gambit isn't enough of a motivation, so maybe they can limit the loading of such content to those who want it, like Call of Duty is doing now? I don't know....it's a weird issue for me to address anyway, as for PC at least I have 10 TB of storage hooked up to my rig. I can see the reason for doing this as driven by the low storage space of the consoles, however; if you had a full unvaulted Destiny 2 download plus one current Call of Duty Cold War download then there wouldn't be much, if any room for other games.....and on some consoles like Xbox Series S models, no room at all without expanding the storage.

I mentioned the Season Pass earlier. Destiny is a really odd duck with these. I can see the means of progression in a game like Fortnite; the season pass ticks up with the consistency of a well-engineered gamification process designed to insure my son and I keep logging in (though in our defense we are taking it easy on Fortnite, the game's near burnout point--again). Other games treat the season pass as a special privilege reserved for the diehards and the best of the best, such as PUBG, which lets you advance mainly by offering challenges of such difficulty that I realize I, as a middle aged gamer, am not really the target audience for PUBG....the advancement rate is too low for one of my middling reflexes.

Destiny, however, offers up something midway between the two. It does offer a lot of specialized quests and achievements, at least by Season 13, which when completed give you a decent reward.....it's just figuring out where to go to complete these things that can be a pain, and at times some of the tasks just sound so tedious, especially if one's obsession with the game's style and plot is based entirely on exactly that--the style and plot--and not repetitious gameplay. Still, with Season 13 for the first time I feel like I have a chance of getting more than 20 ranks in the season pass before it expires, something I don't usually accomplish. In the end, all the gear options in the season pass are not even worth it; the only thing that really makes it worthwhile is the materials that let you swap stats on items, as those can be quite difficult to find if you are not a repetitiously obsessed grinder.

In the end, I wish Bungie would recognize that there's a segment of the Destiny fanbase that would really rather have all the story pieces easier to find and more clearly defined; that this group is distinctly separate from the other group, that wants a single game to log in to every day that lets them grind repetitively against the same experience day in and day out. Bring back the Red War campaign, bring back all the campaigns, and make them optional downloadable content. Let me enjoy the part of Destiny that reminds me most of the good old days of Bungie when they did Halo and made excellent single player campaigns. Then, if I feel like it, let me dabble in the multiplayer content, but only if I feel like it.

Posted by Doctor Futurity at 9:18 AM

Email ThisBlogThis!Share to TwitterShare to FacebookShare to Pinterest
Labels: Destiny Beyond Light