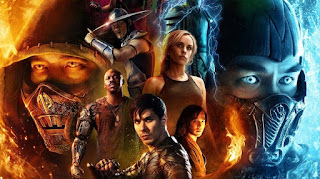 Here's the thing about Mortal Kombat: after 11 official games and a slew of side games, the actual plot of Mortal Kombat, such as it is, remains a pure contrivance to explain away a lot of arcade fighting. It's got time travel, time changes, other dimensions, immortal and also very mortal fighters, cyberpunk, sorcery, ninjas and superspies. It's all over the map and tonally is only consistent with the cheese and gore. So a movie in this franchise mostly needs to be about an excuse for a lot of fighting to represent this franchise well.

Sure, you have hardcore fans who might question some choices: the relationship of Sub-Zero and Scorpion; the way Jax and Kano get their cybernetics; whether Johnny Cage or Liu Kang are the "main" protagonists, etc. etc. and each game treats these subjects differently. Hell, the complex and bizarre plots of the most recent trilogy in the MK games (MK 9, 10 and 11) have set a surprisingly high bar for low brow pulp fighting game lore, to be honest.

The new Mortal Kombat movie does have to live up to this very high and also incredibly low bar for entertainment. After watching it, I kind of think it does a pretty good job, getting an A for effort in the process, at least in so far as it manages to be a damn fine B movie.

I won't go into too many specifics, but I will address the movie by its salient benchmarks:

The Kombat - the movie does an admirable job of focusing on numerous "arena set piece" battles and manages to pull it off surprisingly well. Despite some assertions to to the contrary (namely other reviewers who I feel may have not watched the same movie I did) this film had plenty of action pieces and fewer boring plot bits than I was expecting.....four minute backstory on Scorpion and Sub-Zero at the beginning aside, the movie paces well between fights and plot exposition.

About the biggest criticism I could make here was that the grand finale, while a fine action sequence in itself, felt like the moment where most other movies were about to lead you into the Big Ending. Here, it ended like we should expect this to lead in to "Mortal Kombat, the streaming series continues."

The Plot - There's an early scene where the new guy (Cole) meets Sonja Blade and she infodumps on him with all the details necessary for us to get up to speed. Part of me was, like, "that was quick," but then the original MK movie did the exact same thing, except with Raiden, so m'eh I suppose. Overall, though, this movie had exactly enough plot to move things along, and the most "excessive" bits were mostly the new guy, Cole, who was primarily there as a way of tying the beginning fight to the end, and provide some sort of "Joe Everyman" character for "Average Male Viewer" to relate to.

I wasn't a huge fan of the way the story artlessly tied everyone's powers (be it sorcery or cybernetics) to their special dragon tattoos, but whatever. It's Mortal Kombat, this makes as much sense as the many ways the video games either did or did not bother to explain anything. To its credit, it was very internally consistent with its own world logic.

The Characters - We get to see a baker's dozen of the MK universe characters including at least one I haven't seen in many games (the winged Nitara whom I can't recall seeing in a long time), a dude with a giant hammer that I did not recognize at all, and plenty of classics like Jax, Sonja, Sub-Zero, Scorpion, Kabal, Tsang Shung, Liu Kang, Kung Lao, Mileena, Reptile, Kano and Raiden. Most of the designs focused on their more recent costume designs in MK 10 and 11, which is to be expected. Interestingly they treated this as essentially an origin story for most of them, not merely in a "let's meet Jax and co." kind of way but in a "here's how Jax gets his arms, Kano gets his eye, etc." kind of way.

The big annoyance for me is that I rather liked the old idea from the original games of guys like Kano, Kabal and Jax being part of a criminal and black ops underground rife with illegal cybernetic enhancements. In the movie, it turns out they all gain these powers through being chosen ones, and the powers of the chosen can manifest in weird ways: ki-shouting fireballs and cybernetic arms are essentially coming from the same inner power source for the champions, which makes exactly as much sense as any other Mortal Kombat game's backstory so whadda I know I guess.

In the end, in terms of style, presentation and voice I'll state my favorite depiction on the big screen was Kabal.

The Special Effects - actually the effects were pretty good. Nothing stood out, especially, but I found little to distract in this regard. In some cases such as with Reptile it was nice to see him get a quality on-screen treatment. The FX fell somewhere above the "end of any DC movie" sort of low bar, and are a bit closer to the "made for streaming Marvel series" bar, if you know what I mean. I'm sure this movie would have done fine in the theaters in a pre-pandemic universe.

Overall....solid B movie! Would watch with the family again, though I'll note it's characters would all be poor if they had to contribute to the swear jar. Also, if you let your kid(s) play the MK games then you probably won't mind the hyperviolent fatalities, but this movie is fairly rife with brutal murders so keep that in mind.

Posted by Doctor Futurity at 3:36 PM