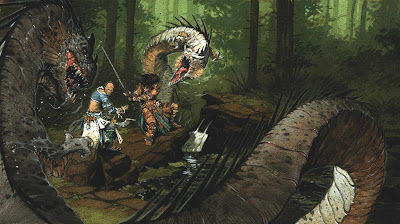 After playing the latest D&D 3.5 game last night, I had a thought: games often require, maybe even demand something I would describe as ornamentation.

For some games, ornamentation is done by including specific elements which, if not really necessary, nonetheless create some of the game's unique flavor or style. An easy example of this is 13th Age, a game which functions just fine without it's Icon Mechanics, but because of the Icon Mechanics it makes 13th Age stand apart from other iterations of D20.

If you aren't familiar with 13th Age, the Icon System provides for 12 distinct archetypal personalities who represent the major movers and shakers in the campaign world. These aren't gods, as such; they are literally iconic beings comparable in role to Sauron, Gandalf, Belgarion and the Wizard of Oz....they are prominent and important fantasy characters who define the world as much as anything, and are critical to the plot elements of the story in obscure and sometimes inscrutable ways.

The Icon System  in 13th Age is designed to simulate these big movers and shakers behind the scene, giving a simple mechanic for GMs to introduce relationships with the Twelve iconic personalities to the player characters, and a way to determine if the influence is positive, negative or weird. It takes what is otherwise a "D&D 4.5" game system and makes it unique. But...you could remove the Icon system entirely and the game remains fully playable for the most part, suggesting to me that the Icon mechanic is essentially an ornament....you hang it on the core system to sparkle it up, and in theory could move the icon mechanic to another game.

Dungeon Crawl Classics has a bunch of ornaments hanging off of it. The patron system for wizards is key, providing a rather elaborate way to make spellcasting distinct from other D&D systems. It reminds me of some of the old magic ideas introduced in 3rd edition's Tome of Magic, but with a much more dramatic flare. You could in theory port it to other games with some work, too. That said....an item like the patron system is one of DCC's ornaments. It's distinct art style, designed to evoke memories of Erol Otus's drawings is also an ornament of DCC. Likewise with its choice of weird dice, funnel crawls for level zero gangs and other such features....DCC is full of ornamentation.

This got me to thinking about D&D 3rd edition and its ornamentation. At the time, its design feature was "unify and clean up AD&D 2E." But twenty years on, I sort of feel like taken as its own thing D&D 3/3.5 has some distinct ornamentation of its own. One which was artistically evident back then was its dungeonpunk design aesthetic....the art deliberately tried to depict what actual adventurers laden with gear might look like.

More noteworthy, though, is what I call the "tactical minutiae," an element of design in which lots and lots of distinct little factors apply to modifying combat. An archer in D&D 3.5 has to worry about what feats he has, as they affect how effective he is in combat against opponents at range and engaged with allies. You can see a variety of modifiers stack up. Back in the day I'd have called this a legacy of D&D's origins as a wargame, and chalked it up to an elaborate combat mechanic. Today, I sort of feel like it's retroactively become an ornament of that edition.

The relatively intense mechanics of tactical combat in 3rd edition led to simplified future editions, culminating in D&D 5E which eschews almost all of those old rules in favor of the most streamlined experience possible....it attempts the bare minimum to still feel like you have some tactics in combat without burdening the players with any more details than is minimally necessary. In 3rd edition however, going back to the system you realize suddenly just how much of this stuff is missing from the current edition, and how different the older system feels as a result in contrast.

Last night's session evoked for me simultaneous moments of deep satisfaction and grim annoyance. We're suddenly worrying about things like -4 penalties for firing into melee and the group had to hide out for a couple days to heal and recover. These are worries that are built in to 3rd edition as a natural process, but were essentially expunged from later editions. The notion that any character might have wounds that require healing over more than a day is essentially anathema to D&D 5E and Pathfinder 2E.....but in 3rd edition this stuff matters again.

This gets me to thinking that, barring the actual timeline of development, going backwards to choose an older edition like this (or AD&D, or B/X D&D) is a form of ornamentation. These older editions can literally hang off of their designs "mortal consequences and tactical rigor" as features now, not bugs like they were once considered. Sure, maybe D&D 5E is essentially the most popular edition ever because the current player base does not need or want "realistic" damage and tactical choices, but some portion of the player base (and plenty of old grognards) might. These older editions, once derided for their complexity and attempts at verisimilitude, now stand out for this offering, as current game design has essentially gone too far in removing such layers of detail from the experience.

I can't say I am 100% excited about resuming D&D 3.5 as I understand that the minutiae of the process can slow things down, and must be enjoyed for its ornamental value as much as anything. Still, it is nice to play a game where players (and DMs) need to factor in the fact that players may bite off more than they can chew, and may need to plan for some hiatuses to recover at times. This changes the pace and feel of the game in a manner which current editions (even PF2E with its downtime rules) have trouble emulating. To some this might seem weird, but risk/reward factors in a game can actually make the players feel like higher stakes means greater personal investment. I'm not suggesting risk doesn't exist in current editions --it does-- but that risk is mitigated fairly rapidly, and it is rare to see 5E or PF2E characters nursing wounds for more than hour or two. I admit that from my own perspective as a DM it means I can't rely on certain story beats as I could in a system like, say, Call of Cthulhu in which surpassing adversity becomes a core component of the experience. As a player it readily explains why I have no interest in 5E as a player, preferring instead more baroque systems such as 3.5 or DCC.

Anyway....more random musings. I will get this nostalgia trip with D&D 3rd ediiton out of my system sooner or later, I promise!

Posted by Doctor Futurity at 10:04 AM