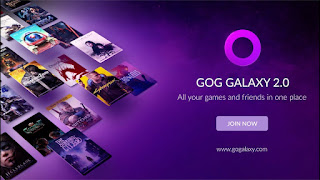 GOG.com is a great digital store, arguably among the best such online venues in business today. They started as their literal moniker, "Good old Games" and stuck for many years to that premise: a storefront for older games that had fallen to the wayside, presentable for use on more recent machines. Over time GOG.com started branching out, offering more contemporary or even occasional new releases, but to this date it remains the single best place to go for gamers who aren't too fussy about the most recent digital releases. Even better, GOG is infamous for its DRM-free downloads; you don't have to find yourself locked in to the Steam or Epic environment to enjoy your games.

Last year GOG.com introduced (or started pushing) a beta load for their store app. I opted in because I like GOG and could not imagine it being a poor experience. The GOG Galaxy v1 was a great experience, uncluttered, easy to find your games in, easy to shop through. They wouldn't make it worse, would they?

As it turns out yes, they totally would. The design intent seems pure on the surface: make the GOG platform a one-stop aggregate of all the games you have across multiple stores. Just link your Steam account, for example, and now you can see your Steam games. It does this for all the platforms, including Xbox and PS4 (but not Switch, interestingly). I tried it out initially but the experience was actually a downgrade on the platform's utility for plenty of reasons:

1. If you want to play in Steam or another platform its easier to just go to that platform anyway;
2. If tracks metrics, lots of metrics, which while interesting didn't feel to me like data I wanted to distribute to anyone, even GOG, freely;
3. With the full 2.0 release I have some games I own in more than one location for various reasons ranging from "free extras copies" to "I wanted to play this without Steam tracking me" to "I forgot I owned it" to "It came in a Humble Bundle" type situations. But when I tried downloading one of these, it kept defaulting to the other platform rather than GOG....I had to open the GOG store to get it to stop trying to download from Steam.
4. This may not be a problem for some, but I have close to 1,500 games between all the platforms. As it turns out, sticking them all in one giant index the way GOG Galaxy 2.0 does it turns your game collection into an endless search function nightmare, and the way this new platform is designed makes it even hard to correctly download the version you actually want. Finally it is utterly pointless to use this with odd platforms such as the consoles. Why GOG, why???

I can see reasons people would like this. It can help you avoid buying a game twice if that's a thing you do and want to stop doing. It can, theoretically, help you navigate your friends lists but I don't even bother messing with that; for one thing, few of the friends I have linked on, say, PS4 are even tangentially relevant to a game I'm playing on GOG or Steam.

All the new GOG Galaxy platform does is make me annoyed with my collection and even more irritated with how much crap I have in the digital and online realm to deal with. I liked the old GOG site, it was just for GOG and made sense for what it's purpose was. This new thing is for....I don't know....young, hip Twitch streaming gamers who need to organize all their platforms obsessively or something. But it feels to me like what it is trying to accomplish has a long way to go before it starts looking useful...to me, at least.

I solved this problem, for now, by relinking and then unlinking my accounts. When Galaxy 2.0 rolled over automatically it dragged all of my data from when I tried the beta. As a result I was once again swamped with unwanted information, despite it saying none of my accounts were linked. After relinking and then unlinking the flood of games dissipated. What a pain in the butt.

Anyway.....it may well be for people out there who want to handle their multiple platforms in one location. That would not be me! I would make all my purchases through GOG if it weren't for the fact that most top dog new releases are Steam or Epic store only. But when I do go to GOG, it is precisely, and very specifically, because I do not want to deal with Steam and Epic. So.....we'll see how GOG's experiment goes, and I wonder how many GOG users will choose not to link up their other platform accounts like me.

Posted by Doctor Futurity at 3:03 PM