When I first played this game I was initially put off by the faux-retro 16 bit graphics mixed with what appeared to be an odious and unpleasant main character, but the game's atmosphere is thick as a knife and I persevered. As it turns out, although odious and unpleasant personalities do pervade The Long Reach, it is in fact a really interesting survival horror/story-puzzle game mashup, and worth the ride.

Warning: a couple minor spoilers ahead!

Your play-through starts with a slacker dude griping to a shopkeeper about his girlfriend, who appears to work at some local lab or facility, when things go horribly south. You might be tempted (as I was) to get intensely annoyed at this character, but fear not, he dies quickly and that's okay.

The game teases you with a transition to a new character, a lab technician who appears to be a guinea pig for some sort of experiment that appears to be totally normal....at first. Suddenly, things go horribly wrong and your poor lab tech (who is a mildly less obnoxious personality) is suddenly forced to deal with a situation not of his own making.

The game likes to subvert expectations. Sometimes people you thought were alive are dead. People you thought were allies are not. Scenarios that seem to be playing out in an expected manner are in fact entirely different. The veil between what is real and what is  an induced nightmare is often unclear, even up to the very end. It's a good ride, actually! I got a surprising Silent Hill vibe at times, though the game itself, being closer in etymology to a point-and-click sidescroller does not really play out like one.

The pixel art is used to good effect, with plenty of surprisingly morbid and disturbing moments that somehow manage to feel sufficiently creepy despite (or maybe because of) the simple graphics. Although I sometimes acknowledge my predilection to gorgeous graphics, I have warmed a lot to the simpler approach of so many indie games, especially with their ease of access on the Switch. The Long Reach, looked at as a unique art style, does what it does very well, and its pixel art ultimately makes the experience more memorable, not less.

Some issues did arise during play. On at least three occasions there were classic "Chess Piece Key"* hunts which felt like padding to add about thirty minutes of gameplay to what was (for me) about a 3 hour experience. Basically, these are moments where the game stops you cold and you need to run around, usually with a fair amount of backtracking, to find the things you need to get through the door you need to open to do the thing you need to do. The first time felt reasonably organic though it still resonated with "busywork" but by the third time it just felt like obvious padding. When you're looking for the four keys to open the safe you'll know what I mean.

Another issue was one of "logic gaps," which point-and-click fans know better as the "puzzles that no one in their right mind would ever guess without digging in to the developer's skull for clues." There are about three occasions (for me) where this happened, though thanklfully the preponderance of good FAQs online made these easy enough to ignore. But, I'll be honest, if I hadn't checked an FAQ on the very first such puzzle I would have probably been stumped. Especially since it almost made sense....but I didn't do something exactly right, so therefore found myself unable to proceed without a hint. (Spoiler hint: you need to cut the rubber bone in half using glass. Then you can use it on the elevator. Yeah.)

A final issue is minor but worth noting: the game is a straight port to Switch, and it does not modify the text size presented on screen when you are playing in portable mode. On the Switch Lite, even with reading glasses I found the text too small and had to complete the game on the other Switch in  big screen mode instead.

Despite these failings, the experience overall was worth it. The story is creepy, atmospheric, and manages to subvert expectations in a healthy way while providing all the survival point-and-click horror you could want for an evening of pixel-graphic gameplay. Any longer and the game might have overstayed its welcome; any shorter and it would have felt incomplete.

Overall: B+! Good adventure for those who want an evening's play of puzzle-based survival horror with emphasis on the puzzles and story. 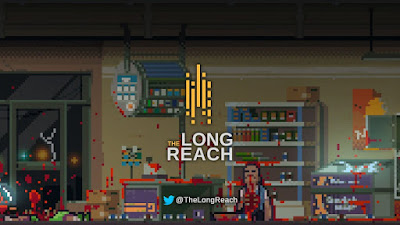 *Resident Evil reference!
Posted by Doctor Futurity at 6:00 AM