The Many Sourcebooks for D&D 5E That Are Luring Me Back: Arcana of the Ancients, Alien Bestiary, Alien Codex, Cthulhu Mythos

In 2013 when Dungeons & Dragons was moving from "next" to 5E, a common complaint among fans was the general dearth of content. Wizards of the Coast had moved to a more austere and careful release schedule, with a limited range of products year over year. So far they've stuck pretty close to this strategy, releasing at most about 5 notable products per year, and until quite recently had avoided any significant new campaign settings aside from Forgotten Realms. Instead, all of the "fluff" content that old school gamers are used to seeing and choosing from migrated to the DMs Guild store, or through other third party content. Over time, the third party content became so enormously prolific that here in 2020 we have an almost overwhelming array of products to choose from for our own curated D&D experience. 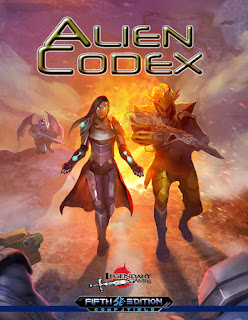 If you want to really make your game Legendary, there's no easier way to do it than to look at Legendary games' Alien Codex. The Alien Codex comes in several flavors, for Starfinder, Pathfinder 1E, and 5th edition (so far; I'm hoping one day we see a PF 2E version but I'm not holding my breath). The book is sufficiently good that I grabbed the 5E edition for sure, and will likely grab the Starfinder editions soon as well.

For those interested, as with many Legendary Games products, Alien Codex is a potpourri of stats, rules,  ideas, equipment and generally useful content to let you populate a setting filled with a future-themes science fantasy campaign. Using this with D&D 5E is almost (not quite, but almost) as robust as grabbing Starfinder. If you're a dedicated fan of the 5E mechanics and like the idea of science-fantasy space adventures this is an extremely useful book. 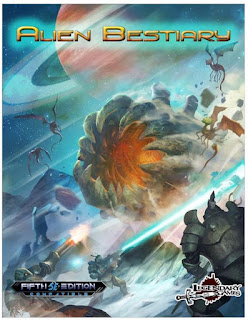 Alien Bestiary, also from Legendary Games, is a natural compliment to Alien Codex. You get hundreds of pages of 5E adapted monsters with a science fiction space-fantasy theme, from old OGL favorites to mythos monsters to completely new things. It's got content designed to tie in to the default settings Legendary Game offers, but the book is primarily a toolkit for your own games. Like Alien Codex the Bestiary is full of goodness, with hundreds of monsters as well as some SF spot rules and equipment in the back. I have both the 5E and Starfinder version, as it fills a much needed roll for both game systems. 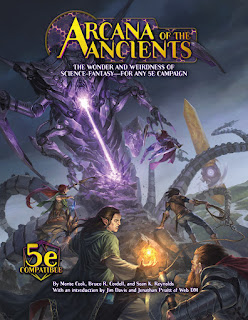 Arcana of the Ancients is a Kickstarted experiment from Monte Cook Games aimed at bringing Numenera concepts and content into line with 5th edition mechanics. It, like the other books on this list, has some content with an implied setting but is primarily aimed at being a toolkit to inspire the DM and allow for the population of your own setting with unique monsters, items and ideas. Because it is deriving this content from Numenera, the mechanics include ideas unique the the Cypher System, such as actual cyphers, rule concepts such as the GM intrusion mechanic, lots of monsters and some new special rules introducing distinct traits and mutations for characters. Future books in this series will focus on Numenera proper, but this one is an excellent stand-alone product for adding far-future "technology indistinguishable from magic" concepts to your campaign. 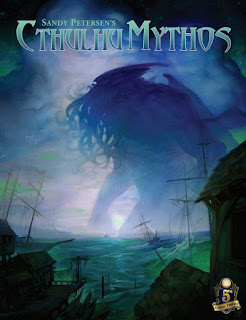 Last but not least is Sandy Petersen's Cthulhu Mythos, an enormous adaptation of the Cthulhu Mythos to D&D 5E. Originally released for Pathfinder 1E, this tome adapts to 5E quite well, providing a strange array of options for adding Lovecraftian themes and elements to a D&D game, including lots of Dreamlands concepts that mesh better with fantasy and weird fiction than the horror elements. That said, the many monsters of Lovecraftian lore and pastiche are well represented here, and the book, like the rest on this list, provides an implied setting while primarily offering you an array of toolkit options to customize to taste. The net result is a book that lets you skew as faithfully or deviate as much as you want to the core conceits of the Cthulhu Mythos. I have enmeshed the Cthulhu Mythos a lot in my own Pergerron campaign, which should I revisit one day will be greatly served by this book, as an example.

All of these tomes as presented allow you to expand your D&D 5E campaigns in strange and interesting directions. For bonus points you can take all four and imagine what sort of strange universe you can devise with them. I've been toying with ideas on this, using Alien Codex to establish a post-Spelljammer future universe in which technology and magic have intersected, and with the future civilizations of this setting exploring a universe populated by the denizens of the Cthulhu Mythos and Alien Bestiary. Meanwhile, traces of lost civilizations across the sci-fi fantasy galaxy suggest that "the ancients" colonized and then abandoned countless worlds for mysterious (and probably Mythos related reasons), leaving these colonies to degenerate back to fantasy worlds populated by the material of the Arcana of the Ancients.

Such a setting, a kitchen sink of space fantasy and weird horror, would provide more than enough gaming content to last decades, I imagine. The four books above would each individually provide enough such content on their own as it is! Anyway.....A+ from the Death Bat for each of these tomes, check them out if the idea of 5E with sci-fi fantasy and weird horror thematics intrigues you.
Posted by Doctor Futurity at 11:21 AM