I grabbed this game on a lark back when it first came out. The premise sounds ridiculously simple: you're  great ape of some sort, and you're trapped in a facility which has been experimenting on you. Suddenly, an opportunity to escape arises, and you proceed to bash your way through wave after wave of scientists, technicians, handlers and eventually spec ops dudes gunning for you.

So...under most conditions this sort of game might at best be yet another forgettable isometric action fest, good for a few minutes until it rapidly gets boring. Ape Out defies this convention however by changing things up a bit.

First, it takes a stark contrasting style of simple tones and colors; you're not seeing a top-down world of apes and experimental labs; you're seeing a tonal universe that looks like it was ripped from a seventies record album cover, or maybe the intro to a funkadelic movie.

Second, it ramps up the beat with reactive music which flows according to the pace of action on the screen. The music from each level comes from intense jungle beat jazz music, and it's a major factor in setting the mood and tone of the experience. If you might notice, this is a common feature of good indie titles: attention to sounds and music. When your graphic design is limited, you can put some of the heavily lifting for the game's feel and tone on the sound design. Ape Out excels at this.

Third (and finally) it's style keeps things simple and to the point. New mechanics are introduced gracefully as challenges, and the levels are strange, complex, rhythmic experiences that beg to be re-experienced. Although the game offers four large stages, each of those stages has lots of replayability.

As a handheld experience Ape Out works great, but I played it almost entirely on the big screen. The sheer audacity and pacing makes it worth playing through more than once...it's a simple yet incredibly visceral, satisfying game to play. Solid A! If you want an action-driven isometric experience which is all about building a cadence of action, music, forward momentum and the victory of escape, then you will likely love this one as I did. A perfect Switch game experience. 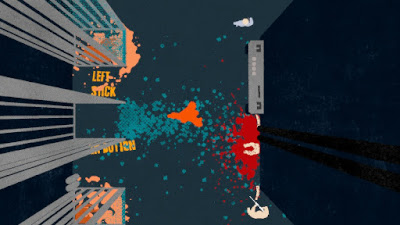 Email ThisBlogThis!Share to TwitterShare to FacebookShare to Pinterest
Labels: Ape Out, nintendo, switch