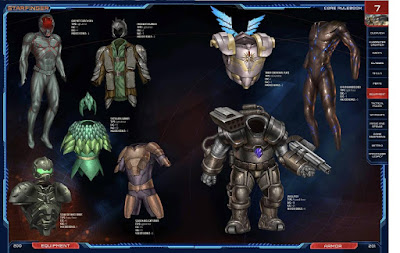 In a thread over on Paizo's blogs people were talking about the weird issue of equipment and levels in Starfinder. The problem is one of framing: Starfinder Core basically says that anyone can use any equipment, but they should normally only have access to gear within 1 level of their current class level of experience. They then leave it up to the GM if they want to break this rule. The core book doesn't provide a ton of reasoning behind this that you can use in-game to explain equipment cost/scarcity, however. Anyway, I posted on the forum over there and then thought it was also worth sharing my ideas here on the blog, too....

I initially (and for quite a while) had issues with the way equipment works in Starfinder, and wondered why the  forced level mechanic wasn't instead simplified, and the "damage" regulated to class advancement instead. I eventually realized that the Starfinder equipment system has a certain amount of brilliance* in it, as the system covers the following ideas (and you can use them as in-game reasons) exceedingly well:

Artificial or Forced Scarcity - this is a universe where combat, adventurers, mercenaries and explorers are the norm; an industry around specialized, advanced and prestige level weapons will rapidly form to take advantage of that and milk the space-mercs for their hard won cash.

Industrial but also Curated and Unique - there is little to suggest that many of these weapons aren't being meticulously hand-crafted and individually modified at some level down the road; spells are enforcing and making weapons more effective, even if the weapons themselves aren't exclusively magic items. The technical side of industrialization probably makes tons of cheap weaponry for lower levels, but the really good stuff takes care and art to produce.

An Economy Driven by Adventurers - similar to the first item above, this is an economy driven largely by people who won't spend much on a fancy dress**, but they will totally splurge on a very efficient plasma cannon. Starfinder's universe is not our world; it's a place where much of the cash circulating in the economy comes from plunder, looting and hitting it big; it's a Wild West anything goes Gold Rush combined with a sci fi Gig Economy, and prestige weapons and armor feed right in to it.

Legality - this really does apply at a certain level in our own world, and it's the reason that most of us, in the US at least, might be able to afford a handgun but we can't get ahold of a light machine gun. Starfinder's trade markets are on the civilized worlds and they probably have laws in place to insure that the really deadly stuff doesn't fall into the wrong (e.g. inexperienced or criminal) hands.

Fate - the great thing about Starfinder is it's a universe with magic and gods. When players grouse that the NPCs never seem to drop high level gear (always coincidentally within 1-2 levels of their CR appropriate loads) it is worth pointing out that such is the will of the gods that the PCs never seem to get lucky and drop a skittermander with a set of level 15 storm polarity gauntlets.

None of the above covers the weird issues with starship care, maintenance and advancement as implied in Starfinder....but that is a topic for another post!

Bonus Idea: if you think Starfinder combat (well, 3rd edition combat in general) is too slow, simply make level 10 and higher weapons "standard" from level 1 and let the players have enough credits to arm themselves to the teeth....just don't forget to do the same for the NPCs! Combat will go real quick, all of a sudden.

Even if you don't do that, if your players are always complaining about not getting that sweet, sweet high tech and high level gear, drop one occasionally as a cool reward (don't tell me you've never let a +5 weapon show up in a level 5 game of Pathfinder...same principle!) ....just remember to make sure that the monster that drops it uses the thing, first! I also suggest taking full advantage of the other "in game" explanation above, and make taking such a powerful weapon on to a space station or in to port a major ordeal when all the alarms go off and the security drones come flying in.


*I still think it could have been done differently, and I think the level-pacing on adancement is too tight; a PC who gets a weapon 3-4 levels higher than they currently are really does unbalance the game, I can say from experience. This is probably not optimal design. I think, to contrast, that Advent Horizon shows how to do this sort of thing well, but in Starfinder's defense it doesn't benefit from the Bounded Accuracy mechanic that AH and D&D 5E use, so work with what you got, not what you want, I guess.....!

**But what about the Envoys, you say? We'll pay for a fancy dress with some serious protection built in! And you would be right, but in the Starfinder universe Envoys are clearly parasites in the mercenary gig economy so whatever, man!
Posted by Doctor Futurity at 10:29 AM