The Universal World Profile Sourcebook for Cepheus and Traveller 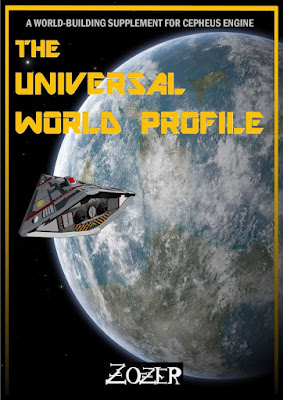 For many of us, particularly the grognards and the gamers who approached SF gaming from the venue of fiction rather than film, there's a consistent expectation that any good SF game will provide you with some useful world building tools, as well as a means by which you can map out your corner of the galaxy for exploration and discovery. Traveller set the bar for this expectation high very early on with a decent system for generating an infinite number of star systems and subsectors to create as large and detailed a galaxy to explore as you could want.

When Mongoose published Traveller in its "1st edition" of their new version of the game they thankfully made it OGL, and then later made the mistake of not keeping MGT2 OGL, thus splitting their market of third party support. Most third party support for Traveller continues, but under the older OGL which has been retooled into a new edition of the game called the Cepheus Engine. This iteration of Traveller is the MGT1 version from the OGL, with some additional content to flesh the game out. It's also spawned lots of new product, aimed primarily as support for Cepheus or for other SF games that could benefits from specific rules such as ship design or world building.

Enter the Universal World Profile. This book is an expansion on the basic world design rules in Cepheus and MGT1, providing more depth of discussion on what each statistic and fact means when creating a world's UWP. For those of you unfamiliar with Traveller's mechanics in world design, each planet gets a "stat block" in Traveller hexadecimal format that lets you quickly determine a planet's composition, size, atmosphere, population, government, star ports and other useful details right no down to trade codes. It was an ingenious way of codifying and making an entire galaxy a prospective explorable option....you could get in a ship, journeying across the parsecs to theoretically endless explorable planets. A creative Traveller referee could take those stat blocks and make them really interesting, or you could play it straight and run Traveller like some sort of trade or merc-driven procedural; the core conceit was brilliant and simple, but it is the reason Traveller remains a persistent and popular RPG to this day and (almost) no one remembers games like Space Opera or Universe (except maybe for how baroque and painful they were).

Anyway, The Universal World Profile sourcebook for Cepheus (and Traveller) is a fully stand-alone resource which will give you more information on the UWP process for its core games, but also serves as a stand-alone resource for GMs who want design worlds for their own preferred SF rpg but maybe don't happen to have a very good resource for that particular game to do so. For example, while the Advent Horizon RPG actually has a nice little world designer in the rules, it's nowhere near as robust as what the UWP can offer. Starfinder has a very Pathfinder-styled section on building locations and encounters for games, but offers zero support for designing a universe to explore in a more organic fashion; it's trending (unfortunately) toward Paizo's desire to sell Adventure Paths rather than material that lets GMs do their own thing, so with a bit of additional effort (such as encounter tables for the Alien Archives) you could use the UWP to actually create some structure to your setting for players to explore.

There are other SF RPGs out there (besides the two I have been messing with a lot recently) that could benefit from a UWP system as well, although it is worth noting some games take the inspiration of the UWP and manage to do their own thing extremely well. GURPS Space has a robust (some might say "too robust") world creator. Stars Without Number, for another example, has a great world generation system that includes building plot hooks and themes in to the design. Unlike SWN however you can design your own brand of SF with the UWP and tailor it to your preferred genre requirements (SWN is great but leans heavily on its implied specific universe). The UWP only really makes the assumption that starships travel discreet distances (parsecs) and that the universe can be captured on a 2-D hex map (hand waive the third dimension). It doesn't presume aliens, but that doesn't stop you from populating every world with them. It doesn't presume technomancy or "the scream" or the idea of an Imperium but all of that can be included or assumed if you so desire.

Anyway, if you need a stand-alone resource for science fiction world building that is accessible and broad in application, check it out. Print version at Lulu, too.

Posted by Doctor Futurity at 9:04 AM