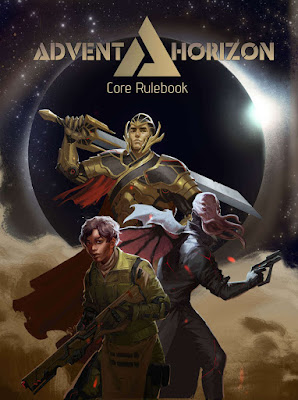 I stumbled across this completely by accident, unfortunately. I say that because this is a really nice RPG, well designed and filling a much-needed niche: Advent Horizons, an SF RPG powered by 5E mechanics under the OGL. We've needed this for a while, and so far no third party publisher has quite gotten this right.

My quest started with the idea that sometimes (like, every other session) I find myself too exhausted from the day to think about running Starfinder. Starfinder is cool, but my resolve to enjoy the game occasionally falters with a series of tried and true D20-isms: "I would love to play this game tonight, but the thought of a 3 hour combat, 45 minutes of rules look up and debate, and 15 minutes of plot" sometimes gets to me. It's not totally as bad as that.....but it can be. And combat can take longer than needed anytime you bring out the maps and pawns, a thing which feels necessary with Pathfinder/Starfinder games.

Sometimes, also, I concede that there are moments where I just can't imagine exactly what is going on in the Starfinder universe. Sure, sometimes I have moments where I grokk it.....but then, other times, I want to play a science fiction game, with the known rules of science fiction using a D&D-like D20 system, and not a fantasy game with science fiction trappings. This is tough, because I think aesthetically Starfinder has a lot going for it....but it's not SF, you know what I mean? Starfinder's a universe where you don't need to (or want to) ask how or why Drift Drives work. Sometimes...well, a lot of the time....I want to play an SF game where stuff like that matters.

Anyway....I also wanted to grab a copy of Legendary Games' Alien Bestiary for 5E, which is an awesome book (I have the Starfinder version). Unfortunately I have no "SF sourcebook" to go with it, to make the monsters useful. I had tried Hyperlanes back a while ago and wrote a bit about it here, and concluded that the game was well developed in certain spots, but the mechanical underpinnings and understanding of 5E in Hyperlanes was woefully inadequate. It had some brilliant bits....but the whole package was falling short in important places.

So yes, I went trowelling through the listings at rpgnow.com (hey, anyone else notice the site is working again?) and eventually discovered this incredibly under-played, low key "Advent Horizon RPG." Even more, it apparently had a print version through Barnes & Noble's site....unusual, but what the heck...I bought the PDF, then soon thereafter ordered a print copy.

Advent Horizon RPG is the actual SF RPG I've been looking for. While it's not generically designed for GMs to insert their own settings in to, it provides all the material you would need to run it as you see fit (much like how while Traveller makes no effort to hide the Imperium, you can certainly ignore it and do your own thing).

Advent Horizons met these important markers for me:
1. Inspired setting, interesting races and classes
2. Robust equipment; talks about augments/cybernetics and important SF elements
3. Focuses on a hard SF to space opera range, but is not "magic in space"
4. Easy to understand ship and space combat rules
5. It makes the default D&D 5E skill system much more robust for a SF setting
6. The designers understand the D&D 5E mechanics and built their system around this concept, making it properly compatible with other 5E content if desired
7. It's a pretty package (black and white in print, but looks good)

I'll do a proper review very soon, but I wanted to get the word out on this ASAP, because I don't think enough people out there who want this game know it exists yet. Check it out!

Posted by Doctor Futurity at 5:04 PM