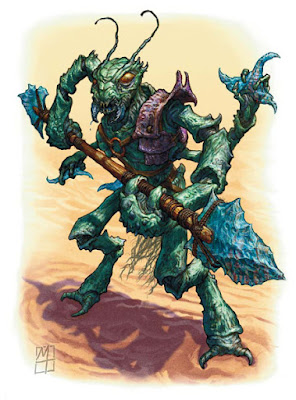 A long time ago I adapted the thri-kreen to Pathfinder, recently I've been considering races that would make great foes in Starfinder: neh-thaalgu, mind flayers, neogi and others are all great choices, but thri-kreen struck me as a great "indigenous" race that could keep popping up on primitive, backwater worlds in the Vast.

The conversion is part "by the book" using Starfinder's suggested adaptations, with a bit of modification to make the thri-kreen a greater potential low level threat.

Poison (Ex): A thri-kreen delivers its poison (Fortitude save DC 11) with a successful
bite attack. The initial and secondary damage is the same (paralysis for 1D8 rounds). A thri-kreen produces enough poison for one bite per day.
Immunity to Sleep (Ex): Since thri-kreen do not sleep, they are immune to magic sleep effects. A thri-kreen spellcaster still requires 8 hours of rest before preparing spells.
Leap (Ex): A thri-kreen is a natural jumper. It calculates the DC for jumping with a ten foot or more head start at ½ the default value and also may jump up to its movement value vertically wit no running start. An unencumbered thri-kreen does not need to make a jump check on athletics.
Camoflage: The exoskeleton of a thri-kreen blends in well with desert terrain, granting it a +4 racial bonus on Hide checks in sandy or arid settings.

Thri-kreen are found on backwater desert worlds in The Vast. The typical thri-kreen is a 1.5 to 2 meters tall four limbed insectoid being, and they demonstrate ferocious territoriality. Some who have studied the thri-kreen suspect that their prevalence on multiple worlds suggest they may have once been capable of space flight. On some worlds thri-kreen demonstrate a keen potential for mysticism. Vesk slavers like to capture thri-kreen as for use as thrall warriors and gladiators.

Thri-kreen live about 30 years and do not sleep, requiring on meditation time for spell recovery.

THRI-KREEN WEAPONRY
Thri-kreen warriors have invented two exotic weapons that are unique to their race—the gythka and the chatkcha. As no thri-kreen have yet developed advanced technology, these weapons only have primitive analog versions:

Gythka: This Large exotic melee double weapon is a polearm with a blade at each end. A thri-kreen who has the Multiweapon Fighting feat can wield two gythkas at once as double weapons because of its four arms. Each end of a gythka deals 1d6 points of slashing damage. Each end is a slashing weapon that deals double damage on a critical hit. (level 1; price 500; Bulk 1; analog)

Chatkcha: This Medium-size exotic ranged weapon is a crystalline throwing wedge. Its sheer weight makes it unwieldy in the hands of those not proficient with it. A chatkcha deals 1d6 points of piercing damage and has a range increment of 20 feet. It deals double damage on a critical hit. (level 1; price 40 apiece; Bulk L; analog) 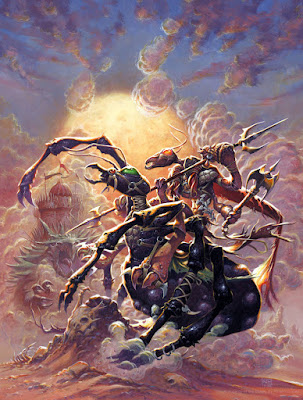