Long after it's original release, the D&D Rules Cyclopedia has it's chance to shine once again as a fully POD edition at rpgnow: 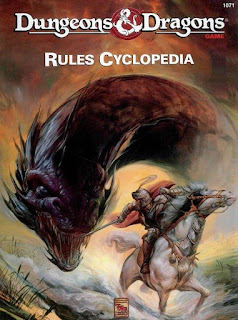 This is the definitive "final" word on the classic BECMI edition of basic Dungeons & Dragons, the quasi side-edition which ran coterminously with AD&D from roughly 1981 to 1993ish. After that there was an attempt to adapt Mystara to an AD&D 2nd edition setting. In 1991 or thereabouts the D&D Cyclopedia was something the "hardcore" D&D fan picked up as a curious novelty...a sort of one-volme collection of all that had come out of five boxed sets in the prior decade, a weird sort of mirror universe edition of AD&D that spoke of worlds in which elves were a distinct thing unto themselves, demons had never been exercised from the Monster Manual because they weren't there in the first place, and multiclassing was anathema.

In 1993 the Creature Catalog, also now POD at rpgnow, arrived. It was a revision and reprint of classic D&D's version of the Monster Manual, after a fashion: 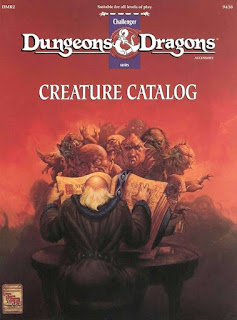 With these and other classic D&D books in POD now, this game is arguably more alive and available that AD&D is at this point. For me, it is much more interesting now to pick these games up and realize that their unique level of simplicity has stripped away any sense I once had that these were the crude hill cousins to AD&D 1st and 2nd edition, and that indeed the prospect of using them feels more viable now than it ever did 25 odd years ago.

I have a soft spot for these books, as this is where one of my favorite monsters, the neh-thalggu brain collectors, got their first appearance.

(Yes, ordering these PODs right now! To set next to my original copies of Basic and Expert with the Otus covers....still my defacto preferred edition).

Posted by Doctor Futurity at 10:42 PM