Starfinder - new group new game session! And it's a hit 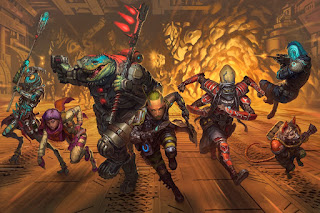 Friday night has never been in my rotation for gaming, but last week we started a new bi-weekly session (or as time permits) for several players I've been able to game with in the past who can't make my Wednesday night or Saturday night games. Plus, this group was keen on Starfinder, so guess what! Starfinder rides again.

This is the third time I've run Starfinder, and it was a very smooth and enjoyable experience. Reasons to contribute to this included:

1. All players at the table had a level of familiarity, interest and buy-in on Starfinder and its mechanics/setting, with excellent character concepts and roleplay skills to match!

2. The GM (me) stopped trying to fit the square Starfinder peg in to the round SF hole and just went with it, playing to the setting's core conceits....this was using my blend of Pact Worlds setting with the Conarium Expanse content I've worked up; it's leveraging my Enzada campaign (which was conceived as a Pathfinder setting) and the Pact Worlds as being in the same universe, and with mysteries tied to all. It's assuming fantasy realms exist or existed, and that the progression into space looks a lot more Space Fantasy Opera than like anything else. I made Zero Effort to try and interpret the world through an SF lens and even less effort to try and rationalize anything else. This suddenly let my internal Verisimilitude Pedant take a rest.

3. I discovered Starfinder Tools which was an immense help in getting everything I needed for stat blocks, loot and more set up super quick.

4. I made liberal use of maps, pawns and such visual aids as helped greatly in navigating combat or potential combat situations. It's funny, but when you use maps and minis the feeling can often be, "Boy I wish we could just resolve this without lots of contraptions on the table," but for systems like Starfinder (and Pathfinder) having lots of visuals greatly enhances the play experience since position on the board really matters.

I had the group start at level 5 this time. I noticed that level 5 seems to be the spot at which average damage ramps up noticeably, and that it felt like a good spot for players to get a really good feel of how the game works, especially veteran players with prior Pathfinder experience under their belt.

Net result was a very fun game in which a ysoki operative, lashunta technomancer, vesk soldier and weird squid thing operative from the "Future Races" 3PP book went on an adventure. They were approach by a techno gnome in need of a heist crew, fought pirates and won, met the gnome and learned of his mad scheme to infiltrate a space station taken over by a cult to the titan Typhon and steal Typhon's sacred relic, smuggled on board in a very "Conan Goes to Mount Doom" manner (but with space ships), infiltrated the abandoned wing of an ancient complex, encountered an army of ghouls, aided the ghouls in escaping to the inhabited wing of the complex, found the relic chamber, fought a bloodbrother which the vesk ultimately punched to death, and then beat a hasty retreat as temple guards arrived...and part 2 will pick up with their frantic escape.

I'll post the module on the blog when the scenario is done. Needless to say, it was a great dynamic experience, had good synergy, and the players were a good group. Everyone in the group liking the mechanics, understanding the game's intent and focus (and Starfinder's almost fetishistic obsession with level-based tech) helped a great deal. The fact that they were excellent RPers who were as willing and able to talk their way out of fights as they were to instigate was just icing on the cake!

Stop me if you've heard this one before: A Ysoki, a Vesk, a Lashunta and a Qlaarpian walk in to a bar...'

"I don't know," says the Lashunta.

Finally the Ysoki asks the Qlaarpian. "What are you? Why are you here?"