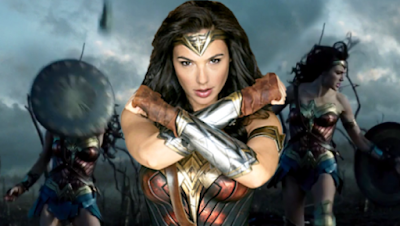 I'll get this out of the way, as usual: I am a DC fanboy so any review I make of a DC film will be biased. That said, I don't have to stretch much to say that Wonder Woman was good. It really was! I was frankly impressed that they managed to do so much right with this one.

The new movie starts with a young Wonder Woman on the Island of Themiscyra and moves forward from there. Most of us have probably got the general idea of the story from the trailers: It's a historical adventure, set during World War I, and Gal Gadot as Wonder Woman gets to leave the island after a spy for the allies, Steve Trevor (Chris Pine) somehow crash lands on the Amazonian island and they rescue him from Germans in hot pursuit. Cut to a lengthy series of scenes explaining both why the Amazons don't want to get involved in the mortal world but ultimately realize they must, and choose Diana, who is herself not a real amazon (being made out of clay and all that) to wield the weapons of the gods and escort Steve Trevor back to the mortal realm. Behind all this is the stink of Ares, who in the film is the last Greek God Standing and most likely the reason mortal men are busy trying to kill each other.

From there the plot moves to a series of set pieces in London to entertain us with the liberated, naturally inquisitive nature of Wonder Woman set against a society with oppressive standards aimed at women. Then off to the battlefront for some truly amazing battle sequences spurred on by Diana's inherent sense of decency and goodness in a world that knows little of either. Eventually it culminates in a sequence where she at last reveals the real Ares and they duke it out in a fashion I will describe only as "DC standard third act mayhem scene."

Along the way we are treated to an amazing ride with entertaining and often funny (appropriately) dialogue, strong characters whom we genuinely like, a sense of adventure and discovery, and a thematic tone that is unique among the superhero film genre so far....Wonder Woman, like only a few other movies before, delivers on a sense of style and purpose that feels almost intoxicatingly fun to watch. It is only in the final act when were are subjected to the by now traditional CGI beat-em-up sequence that I felt the film faltered even a little bit. And even then, it was still enjoyable.

Issues I had with the film are minor: there are a couple of odd moments where I couldn't quite put my finger on it but the pacing or focus felt a bit off, mostly in the last third of the film. Despite this, right up until about the point where they reach the castle and Wonder Woman misses a chance to kill Ludendorf, I felt that the movie was spot on in its overall pacing. But I don't know....this could just be me, feeling like once again maybe too much CGI and quasi-deities battling it out with powers that are defined by the needs of the screen imagery less than any story let me feeling like it was all a bit unreal.

My other (minor) complaint was that this film felt dark. I don't know if it was the screening I was at, or what, but the film seemed ridiculously heavy on dark "bluish" tint, especially for much of the second half of the film.

Despite that, the movie is incredibly solid and currently my favorite film this year behind Guardians of the Galaxy Vol. 2 in terms of sheer audacity and enjoyment. Definitely see it...and take the wife and kids, it's a great movie for the family. Solid A+!!!!