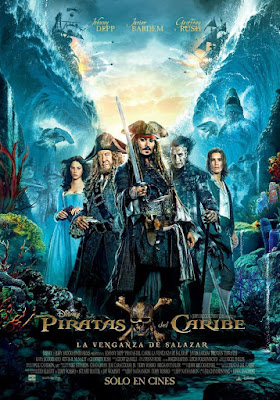 I missed a Pirates movie somewhere along the line (I guess #4 came out when I was hard pressed to find time to go to the theater) but it appears to have had no impact on my experience watching "Dead Men Tell No Tales." Now sure, you can (at least in the past) watch some film franchises (James Bond, for ex) and enjoy them without worrying about continuity. But Dead Men Tell No Tales had a plot and characters predicated on the prior four films and I still found it worked as a more or less stand alone film. (Note: I like the Spanish title above: La Venganza De Salazar)

Now, don't think I liked this movie too much. I can't say it wasn't fun....it was.....but the movie was more fun for my son, who at five and a half knows more about pirates thanks to Disney and his dad than most kids his age probably do. And for a general audience this film was probably a great Summer flick, no doubt about that.....heck, barring a couple English officers being skewered here and there, a pretty big chunk of this movie is pure family fun.

But! And there is always a but when you're on film five of a franchise like this.....it's still not a great movie. At best it demonstrates that you can milk a lot out of the premise of a Disney ride if you do it right, and keep on doing it, to the point where it becomes almost an unwitting parody of itself.

At one point, I felt like I needed a score card to keep track of just how many ghostly, magical ships were floating about....there seemed to be more of them than there were regular, normal pirate ships in this movie. And when a normal ship did appear, it was almost certain to meet doom at the hands of some ghostly ship thirty seconds later.

The film is visually spectacular, though.....just don't assume anything about the plot (that there is much of one, for example) and roll with it and you'll find it a pleasant enough experience. But wait a bit and when you're at the fridge one evening a bunch of odd questions will come to mind about this movie (assuming you think much more of it at all)....such as (spoilers ahead):

1. What was the purposes of the witch held captive by the English? Was she really just a foil for Barbossa to learn what he needed, and later there to tell the English soldiers where to go? Why were they so intent on hanging the main female protagonist as a witch, when they had an actual, real witch in their custody anyway? Was this something from movie #4 that would have made more sense to me, but for missing context?

2. Was Depp ever sober in this movie? Is Jack Sparrow nothing more than a timeless maguffin designed to make things happen on screen through his unwitting, drunken antics? Do I really need to ask these questions? When the main character revelation/story moment goes to a secondary character like Barbossa, it suggests worlds about the purpose/relationship of the principle protagonist of the prior films.....Sparrow is just here to "induce" action, or maybe "motion" is a better word. He serves no other purpose anymore.

3. When the shining moment of the film is an end cameo by the good actors from prior films, and you realize in that moment you just watched a passable film with no discernable characters of any screen presence to root for...well.....it kinda feels like you've been had, doesn't it?

4. Was it just me, or did the whole "Salazar and his crew are ashen ghost pirate-hunters because their ship sailed in to the Devil's Triangle that looks a whole lot like some big cove, but hey we need some excuse for more ghosts to run around this time so roll with it" sequence seem a bit.....blah? Some sequences in this film felt strongly like they had concocted a scene to film first and worked out the plot bits later. Like, I am willing to bet somewhere they started with "We need ghosts in this movie. Hey, what if they looked like they were partially made of ash smoke for a cool effect? Someone work out a story bit to explain it later, for now FX get to work on this look."

Yes, it felt like how many video games are made: a dozen or so locations and a ton of assets are produced, and somewhere along the way the studio hires a script writer to try and makes sense of it all.

5. That whole wedding sequence with Sparrow and his "bride" felt like someone realized that they hadn't had a decent laugh recently so hastily found a way to shoehorn one in.

6. How many more piratical or nautical phrases remain for them to exploit as movie titles before they run out?

....Okay look, this was a passable, almost essentially okay movie for what it is: a fifth film to a Disney franchise based on a ride. Plus my kid loved it....but I know I'm not totally off base; my wife liked Salazar as the villain but even she felt it was a bit "meh" and she's incredibly forgiving of these movies normally.

Still, that they have gotten this far and the movie is at least watchable is kind of amazing. I'll call it a solid C and move on.

C
Posted by Doctor Futurity at 6:00 AM

Email ThisBlogThis!Share to TwitterShare to FacebookShare to Pinterest
Labels: dead men tell no tales, movie review, pirates of the caribbean