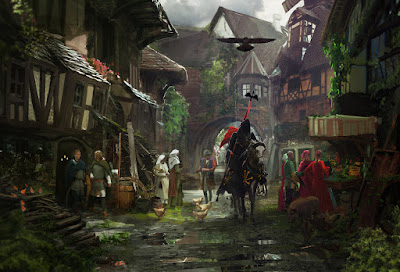 Black Lotus Guild
Group Alignment: chaotic good
Leader: Wormie Vellsoth and The Seven
Headquarters: Vellsoth Estate, Tavern over the Inn
Possibly the most infamous and powerful Thieves' Guild in Octzel, this organization was established around 2025 by the legendary Sylveinurian Wormi Vellsoth. Short, youthful, and clever, Wormie was responsible in his earlier career for defeating the Magelord Quirak three times successively. When Quirak was finally killed the pallor which had been cast over octzel was lifted, and the ruling king was able to move on to  other, better things. In his thanks, he granted Wormie a special title, Vellsoth, which is a lot like "Auslander," except with an aura of dignity and respect about it. Wormie's original Einurian title in known only to himself, and is presumably not used by the adventurer to prevent retaliation for his nefarious deeds on his homeland family. In the centuries since, Vellsoth has become a title unto itself amongst Sylvan Elves, and there are many descendants of the legendary Wormi.
Wormi, with an estate and an old mansion, settled down in Octzel and set about uniting the local thieve's guilds, which previously he had been at odds with because of then Guildmaster Spleen, who was later found dead. Before too long, the three major guilds had been united, and were under the indirect influence of Wormie Vellsoth.
Wormie struck a deal with king Octzoron Vellos, to act as an information supplier and informant on illegal activities which would affect the crown. By allying his organization with the King's own pool of informants and spies, Wormie insured that the Black Lotus Guild would stay a permanent resident.
The Guild has, because of its role as an information supplier, become the target of groups such as the Fire Knives, the Black Society, and the Hooded Brothers.
The Black Lotus guild has six districts, which work the local territory in their own special way. By keeping the trust between the six guild lords and a good relationship with all, the Inner Court of the Black Lotus Guild remains a strong and loyal organization. Wormi Vellsoth retains the title of Guildmaster to the Black Lotus, and works behind the scenes under the title of Prince of Shadows to serve both the people and the crown.
The Black Lotus guild gets much of its income from peddling the Black Lotus in its granular, smokeable form, to the wealthy upper class of Octzel, which prizes the substance for its illuminating qualities. The use of the black lotus comes with some social stigma, especially when addicts suffer from its use, but there is no legal restriction on the substance.
The Black Lotus guild also provides enforcement protection to local merchants. This process is nebulous as to the legal nature of the racket. If you don't pay, then you’re a target of robbery, but if you do pay, and someone else robs you, the Guild will track them down, bring them to justice, and recover your stolen goods, if possible.
The Black Lotus Guild has Six districts, and while no single district has a permanent base of operations, there are four areas which are known to be frequented by the Guild. This includes The Maze in the sewers, where raw recruits are dumped for fun and experience. There is an abandoned Bath House in the Inner City which has been used as a gathering place for guild members. There is the Vellsoth Mansion, which is actually used very infrequently by the guild, and is garrisoned by forty of the meanest mercenaries that money could buy. Finally, there is the place where "The Seven" meet, at the Tavern Over the Inn. This is Octzel's most famous establishment, and more on it can be found in the area descriptions. 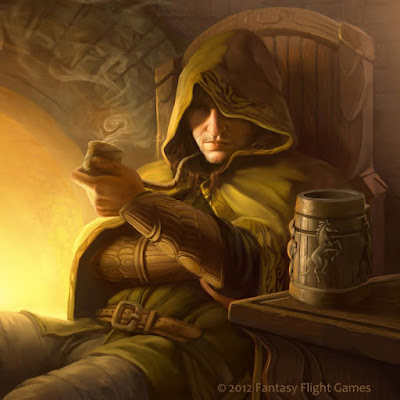 Wormie Vellsoth
(5E: Level 13 wizard/Level 15 rogue, CG)
(13A: Level 7 rogue/Level 3 wizard)
Wormie Vellsoth is the Prince of Shadows, the chief icon of the underworld in the modern era. He acquired the role from his former rival, Tanis, who once held the title for close to five decades before his position of authority was usurped. Stories of how this came to pass are surprisingly sparse; it is suspected that Tanis quietly retired after picking Wormie to be his successor.
Wormie is a fair guild master as they go, and he spends a great deal of time in Octzel managing his guild’s affairs when he’s not adventuring across the world or exploring extradimensional planes of existence, which is honestly where he spends 90% of his time these days.
Wormie feels a strong personal rivalry with the Guild of the Spheres, as well as the Fire Knives. Rumor is that he has it out for Celiobantes Astiriate (and vice versa) and that sooner or later the two will come to blows.
Wormie’s history is shrouded in mystery, but scholars of history note that he appears to have been the same elf who aided in the war between Galonia and Hyrkania in 1,958-1,962 AW during the rise of the Dark Pharaoh. Rumors that he was chosen by the god Hermes to be the deity’s avatar are uncertain, but Wormie is known to carry a legendary artifact, the fabled Broken Sword, a short sword which is said to have been cracked during the War of the Gods when it was used to seal the Abyssal Rift that engulfed the old empire in that lost era.
(5E: The Broken Sword is a legendary attunable +3 Demon’s Bane Short Sword which deals +5D8 damage against evil planar creatures; the weapon always grants advantage when used in sneak attacks by rogues)
(13A: This +3 Demon’s Bane Short Sword deals 1D8 extra damage per level of the wielder against evil outsiders, and in the hands of a rogue it always grants sneak attack bonuses against targets; Quirk: the wielder develops a sense of paranoia and an overwhelming suspicion against anyone remotely planar-connected, and an insatiable desire to destroy demons)

There are six guild officers in charge of the city in 2,090, collectively known as “The Seven” including Wormie. They are: 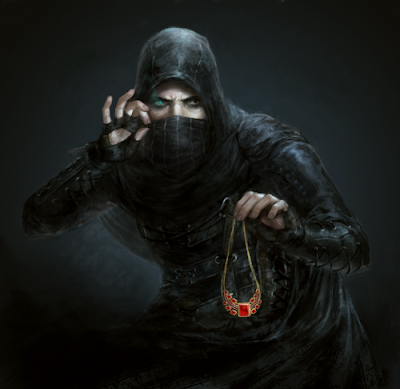 Jenasturn Celoth
(5E: human rogue level 10; NE)
(13A: human rogue level 5)
Officer of the slums, Jenasturn is noted for his cruel efficiency and his twisted visage; Celoth is touched with leprosy, and he keeps himself swathed in thick dark bandages to hide his condition. The rumors are that Celoth was cursed by a maiden warlock who served the demon lord of pestilence, Pazzuzzu, for some sleight. Before his curse Celoth had raised a family and several children; it is not yet known if they will suffer under the curse of leprosy as he has.

Drenada Vestaine
(5E: human rogue level 10; CN)
(13A: human rogue level 5)
Drenada is the officer in charge of the red light district of Octzel, more commonly known as the Temple District of Phonatas, or sometime just as the Dark Street District since the region is notorious for having no maintained oil lamps due to rampant theft.
Drenada suffers from a severe form of schizophrenia or possibly hysteria, though no “modern” diagnosis of her condition actually exists. She is suspected of murdering more than a few patrons at the Temple of Phonatas when the men in question either fail to pay or abuse the courtesans.  Drenada believes that she is directed by a strong voice from the “Seraph of revenge,” whom she calls Maliskar. Religious scholars will note that there is no documented evidence of such a seraph on record.

Blackscar Longthorn
(5E: tiefling Fighter level 13; CG)
(13A: tiefling fighter level 6)
Blackscar Longthorn gets his name from the long venuous black scars which cross his ruddy red skin, and his lengthy pronged horns which are an inconvenience to him when navigating doorways and close quarters. If he had a real name once even he doesn’t remember it.
As the officer of the Mercenary District Blackscar has his work cut out for him, negotiating with the various mercenary’s guilds which despise the theive’s guilds and dislike Blackscar’s own “guild within a guild” called the Blackscar Raiders for their connection to the Black Lotus Guild. Blackscar is an honorable man even if he’s not very lawful, and refuses any contract that would harm innocents. Meanwhile, he provides his men to Wormie as hard-hitting muscle for guild actions that require a lot of force. The arrangement works well, and Wormie considers Blackscar a good friend, despite his predilection for casting suspicion upon the planetouched.

Tabitha, the Sea Wolf
(5E: half-elf rogue 6/fighter 6; NE)
(13A: half-elf rogue 3/fighter 3)
Tabitha was once a famous sea pirate and adventurer who worked for a period of time as a privateer of Octzel, targeting ships of Galonia, Persedonia and Hettanar to the north. When she turned 40 she decided to settle down and purchased a rather impressive estate along the waterfront. Wormie approached her (having known her from prior adventures) about taking the position of guild officer for the Docks District, and she accepted. Tabitha has since become a shrewd broker of foreign goods and information, and relies on a tightly run division of the guild that keeps tracks of hundreds of active merchant ships. She has an on-again, off-again relationship with Anton Covaros, the Harbormaster of Octzel, who is himself exceedingly straight-laced.

Twenson Vultaire
(5E: gnome sorcerer level 12; LE)
(13A: gnome sorcerer level 6)
Twenson is a gnomish artificer and sorcerer who migrated to Octzel with his gnomish community some decades ago, and like most gnomes who experience the city he was profoundly affected. Of The Seven, Twenson alone is rigorous about lawful practices and business, and he leverages this studious familiarity with business practices in Octzel to run the Market District with great efficiency. He drafts contracts with merchants and providers to insure they get “insurance” against unlawful behavior, and guarantees that they will not suffer under the watch of the Black Lotus Gang.

Carteros Slaydan
(5E: human rogue 8; LN)
(13A: human rogue 4)
An aristocrat of a small fortune, Carteros’s clan became wealthy and famous through the sale of religious artifacts across the Middle Kingdoms, making the concept of “profit through iconography” a thing. Carteros inherited the vast wealth of his clan but did little with it initially, partying day and night with the other nobility of the Inner City. In time, he came to be trusted by many, and that was when Wormie offered him the position of seventh Officer of his guild.


Today Carteros is the chief information broker for the Inner City district. He relays the things he hears and sees to ther guild, and utilizes this information to blackmail likely targets, or sell to others who will pay handsomely for such information. His small but dedicated network of spies and informants range from other nobles to house servants and even the indentured.

Posted by Doctor Futurity at 3:08 PM