Charlie Mason at the White Box blog recently released a cleaned-up, fancy version of Swords & Wizardry White Box titled (of course) plain old "White Box." It's not just a reprint with better layout and art: it includes a sort of redux edition of the cooler bits that many people (such as I) consider essential to our classic D&D experience. A few bits in White Box that are not in S&WWB Core include thieves, the elven fighter-mage spellcaster option, demons, dark elves, and other juicy bits that you had to collect from various other resources to make other versions of S&W complete.

I've got a print copy on the way and will comment more then, but if you're a fan of A: Swords & Wizardry, B: collecting every edition of S&W out there, and C: like your S&W full of thieves, elven warrior-ages an demons, then I suggest you grab White Box. Before you do, look at Charlie's blog first, as he has several versions available. I got the red dragon cover on the way in soft cover, but the blue cover is kinda neat, too. 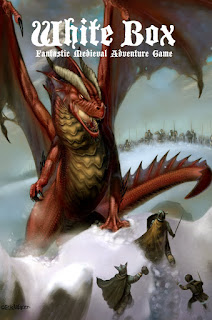 Anyway.....White Box might meet the "minimum standard" I need in my White Box experience (ahem). Will I ever convince my players to go Back to Basics and try it out? Who knows....but sooner or later, my kid's going to be old enough to play D&D with*, and when that time comes, I plan on having this book handy! 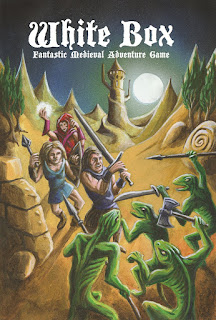 *We've tried "No Thank You, Evil!" from Monte Cook Games and we sorta had fun but were making up a lot of rules as we did. As he's developing, I think five is going to be the "big age" when he starts showing a lot of comprehension for RPGs, based on where he's at now. We'll see...I can say this much, NTYE is good, clean kid-focused fun, but I suspect in the end it's no substitute for straight up classic D&D. But hey, Dad is biased!
Posted by Doctor Futurity at 11:31 PM