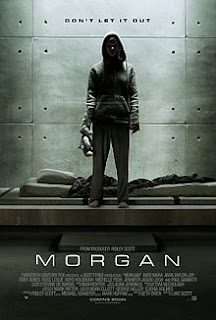 (Mild spoilers in the review)

It's possible you'e heard some not-so-nice reviews about this movie, but I will squelch that right now: this is a really good film. It's not a perfect film....I have more than a few questions about some of the implied dynamics of the near future universe Morgan resides in, especially the ethical and experimental controls that the corporation behind Morgan exercises, but all those aside, this was a compelling mix of SF and horror....with a lot of horror toward the end. Also, a touch of existentialism, framed from the view of what is essentially a tale of the origin of Blade Runner's replicants.

Morgan's tale is set in the not too distant future, when controlled experimental live hybrid AI are a thing under development: techniques described which seemed (to me) to suggest implanting programmed nanites into a host egg allowed the nanites to control and direct the creation of a unique sort of life form. Android might be one word, but anyone knowing Ridley Scott's son is the director will immediately think "replicant." In a great many respects this film feels like it's taking place in that universe, the one where Dekker hunts down rogue replicants......and we're getting to see another, similar kind of hunter in Morgan.

Anyway, a corporation is funding research into this hybrid "human" which is grown to adulthood over a space of five years, directed by the nanites in her system that make her uniquely NOT human. Morgan (Anya Taylor-Joy) is the result of this experiment, one of several it is suggested, including the alluded to Helsinki event in which it sounds like we have the makings of a future "prequel" movie. Morgan herself appears to be a somewhat emotionally disconnected teenage girl, with a grey tone to her skin and and interesting affect. She's surrounded by a research team in a remote woodland location which is utterly dedicated to her.....she is clearly perceived as their first great success story, an artificially intelligent being which has "grown" a human body from donated tissue/egg cells, directed toward specific and intense purpose and intelligence by the nanites suffusing her very being.

Until, of course, a little incident that starts the movie off, in which Morgan displays a sudden burst of psychotic anger and badly stabs one of her caretakers. In comes a company Risk Management Assessor, a "cleaner" named Lee Weathers (Kate Mara) who is a no-nonsense professional here to protect company interests and ideally insure that the asset (Morgan) is retained for further study and use, if possible. Lee is very business focused and no-nonsense.....and has an agenda on behalf of the company, to get the mess cleaned up by any means.

As Lee pieces together what has gone on at the research location, she sees scientists deeply invested in Morgan, who have seen her grow up over five years from a baby to a little girl to adult, at a rapidly accelerated pace. Each of the scientists have their own private agendas clouding their judgement, of course....the couple who see Morgan as like the child they cannot have, behavioral psychologist Amy who has projected deep emotional feelings on to Morgan, Dr. Ziegler and Dr. Cheng who see Morgan as their chance at redemption for the failings of Helsinki and other prior experiments in the field.

Amidst all of this is are even bigger problems, revealed slowly over the course of Lee's investigation: not the least of these is the fact that despite the research team aiming for an artificial being who is emotionally capable, Morgan is in fact part of an experimental weapon project. Also, Morgan kind of likes killing things, but she doesn't know why (yet), though visiting psychoanalyst Dr. Shapiro (played as always to the hilt by Paul Giamatti) will, ultimately, get down to the brass tacks on this problem.

The film has a slow but steady build up, with an increasing level of menace that just oozes with every word, every unpleasant engagement with the powder keg brewing at this research station. It's not a conventional horror film in this sense, and if you came to the movie expecting a more conventional terror ride you will be disappointed; there's a level of psychological malice at work here that does a fantastic job of setting the mood for later, when the shit really hits the fan.

Ultimately the film gets to where it's been building up, as Morgan proceeds in the way we've all been anticipating since the first second of the movie, leading to a brutal finish. There's a surprise or two along the way, of course, but at a couple moments I really felt a sort of resonant throwback to Rutger Hauer's performance in Blade Runner....not in any dialogue so much as the "feel" of where Morgan is at, what she is. If you wonder why, in Blade Runner, replicants are built with short lifespans....well, this movie is explaining it to you.

I had mentioned some plot issues earlier. SPOILER ALERT!

Here's my beef: the film establishes that other "incidents" have taken place, in which bad stuff happened (Helsinki). In fact, it implies that this is "round 3" of the program. So if there's a really bad track record for these projects, why not include a greater level of control and security? Sure, they run the program in the boonies, far from civilization.....but it's clear that wasn't going to cut it, no matter what. Maybe the charisma of the lead researchers was enough to persuade their employer that they could do it this time? But even so, five years of limited supervision, with a team of researchers who all have hidden psych issues that have "psychotic android AI" as a key trigger....well, I guess it wouldn't be as exciting if they were all balanced and had lots of heavily automated weaponry protecting the place, would it?

There's also a scene where Lee has to escape from a location deep in the secured bunker where Morgan is normally held. Morgan's been there five years and never escaped on her own, but Lee does it in a few hours. Also....in the scene where Morgan first makes a break for it, power goes off. There was no explanation (that I could detect) for why this happened. The vague reference to her "precognitive abilities" couldn't have been a hint, could it? How would precog have allowed her to do so? She also seemed to know a heck of a lot about people she had never met, but it was never established in he movie just how she knew this.

And finally: I love Paul Giamatti when he shows up to chew the scenery as "batshit crazy middle aged dude with an agenda" in any film, but I really felt it was a bit odd that he was apparently operating with a death wish, because if his specialty was evaluating the pysche of potentially rogue AI experiments, what on earth prompted him to goad Morgan like he did? Her referencing his teen daughter? The fact that he apparently had no idea how violent she could be because he didn't review the footage of her prior acts of carnage?

I don't know if Morgan is deliberately intended to suggest it belongs in the Blade Runner universe, but it resonates very well with that film. If you're in to an intense blend of near-future SF, psychological horror and brutal down-and-dirty murder-porn, Morgan is going hit all of your buttons at least once or twice. For me this was a sleeper gem, flawed but fascinating, which I almost ignored until I (luckily) read up on what it was about. If you want some cool SF and horror but the barest minimum of CGI, this is a good choice.

Email ThisBlogThis!Share to TwitterShare to FacebookShare to Pinterest
Labels: morgan