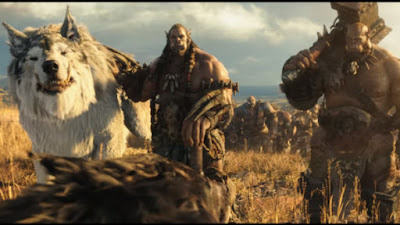 Internet, you have failed me for the last time. No, not true....I expect many more failures, but Warcraft is just another example of how the hyperbole of the masses led me to decide not to see this film until it hit the dollar theater. In all fairness the movie trailer didn't help...it's trailers looked very "meh" to me so I honestly found the idea that Warcraft's first film was a dud to be believable.

Well, having now seen it I'm like...What The Hell, Internet? This movie was damned good, and managed to tell a great story in two hours. I really miss the days when movies could pull this stunt off in two hours.  Warcraft not only did this, but it provided a very focused, interesting narrative, and not one which I found at all difficult to follow. In fact most of the complaints/issues I had read about prior to seeing the film all seemed trivial and nit-picky now in context.

The movie focuses on the dawn of the Warcraft storyline, going back to the lore of the RTSes near as I can tell. Disclosure: I have logged a lot of World of Warcraft time in, and played Warcraft 1 and 2 many ages ago. However, I am not a lore master of the WoW universe.....in fact I'm pretty weak on my WoW lore, regarding most of the content I've experienced in the game universe to be muddy and sometimes incomprehensible or contradictory.

I know specific characters really well, as well as the physical trappings of the setting. This movie nailed the "iconic elements" really well....it was something else entirely to actually recognize Stormwind, Ironforge, the structural design of the orcish encampments and all of that. The characters in this film were amazingly well rendered, much more so than the trailer even suggested....every orc had personality and a unique look. Hell, the human warriors of Stormwind were less impressive than the orcs! So much of this movie was immediately recognizable to anyone who's played WoW for a while, and brought the universe of the game to life in a way I really appreciated. It made me want to play the game again, although on actually trying to do so I realized that what I actually want to play is the World of Warcraft we'll all see in a decade or two, which looks just like this movie, but in real time. Someone let me know when that game comes out, because I'll definitely be there.

Anyway, I'll not go into the details of the plot, but it's a very tightly focused exploration of some key characters in the earliest days of Azeroth's developing confrontation between orcs and men, with a focus specifically on Lothar, brother to the Queen of Stormwind, his relationship with the half-orc Garona and also Thrall's dad, leader of the Frostwolf Clan. Baby Thrall makes an appearance too, stealing every scene as only an unbearably cute and angry orc baby can. The plot was tightly paced, the movie focused on the key characters in a way that other blockbusters that like to run closer to 3 hours can't possibly hope to accomplish, and it was just such a pleasure to watch this movie.

So, if you have never played a Warcraft game before should you see this movie? If you like fantasy films in general, then hell yeah. This movie, and its crew of largely unknown actors, managed to produce a film that I found much more engaging and enjoyable than most fantasy films (including and especially that Bloated Mass called the Hobbit Trilogy) in recent years. It was refreshing, actually, in its honest depiction of a fantasy universe that matched more closely than usual the sort of gaming I get up to every week.....this film bodes well for the potential of a future D&D movie, in fact.

Although it's success in the US is mixed, I sincerely hope the worldwide return was enough to insure we get a sequel. I cannot wait to see what the Lich King looks like on the big screen. Also, we need more murlocs on the big screen. The one screamy dude fishing was not enough!!!! 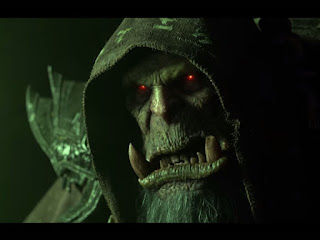 Going by the movie, orcs were seriously OP and must have been nerfed by 2004's WoW release (heh)