While reading my PDF copy of the Runequest 2nd reprint I stumbled across the old Appendix N bibliography that they provided (hmmmm....that can't be a coincidence, can it???). Aside from the usual list of 70's era favorite authors which continue to remain largely timeless, it listed some other Fantasy RPGs considered inspirational or noteworthy. Aside from the usual suspects there's a reference to the Legacy RPG from Legacy Press. On the wiki page on this it alludes to this being a universal RPG, but no other information is provided, beyond that it was designed by David Feldt and published by Legacy Press in 1978.

There's a thread here at Acaeum where someone found a copy, which he described as follows:


"...I found a copy of this looseleaf RPG from Legacy Press and it is.... definitely an artifact from the early era of RPGs. Indeed, according to the cover blurb, it's not even a roleplaying game but, rather, a "second generation, multi-level role assumption game". I've not actually read it thoroughly yet as I just picked it up tonight, but there is some exposition near the back of the book that refers to other early RPGs such as The Empire of the Petal Throne."

Here's the pic posted there: 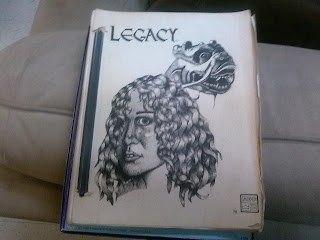 I like to think of myself as being pretty familiar with a majority of the RPG publications from back then....and i owned a great many of them, too. But this one? I have never heard of it, don't recall ever seeing a copy....and yet it clearly was influential enough to bear mentionining in Runquest's Appendix N. Interesting!!!