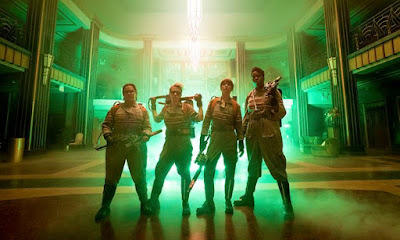 1. Remind dad of the Movie Rules (no noise, no jumping around, no being a pest, etc.)
2. Proceed to dance in seat at Ghostbusters theme
3. Realize we are watching Ghostbuster Girls!!!!!!
4. Oh, let dad know we are now playing Ghostbuster Girls
5. He is the smart one with the hair and the positron collider
6. I am the one with the other hair and the twin pistols
7. Is that Staypuff Marshmallow Man? No he's just a balloon! There he is! No that's the Ghost ghost!!!
8. Stay through credits dancing
9. Go home, making sure Ghostbusters theme is playing in car. Once home put on play positron collider pack, and hunt ghosts all night long.
10. ...and the final, telling sign he liked it: go to Google Play store and load Every Single Free App with Ghostbusters In The Title.

Now for Review #2. My review sort of goes like this:

This was an incredibly entertaining movie, and a real pleasure to watch in a theater not at all crowded...apparently everyone attending this evening was either not in touch with the internet, maybe not even in touch with contemporary nerd hate culture, or defiantly going to see the movie like me because my son frickin' loves Ghostbusters.

I was never a "huge" fan of the original movie...I gradually grew to like it more later on, especially once I lightened up a bit and decided it was okay to have a comedy film borrowing quasi-Lovecraftian theatrics in a humorous manner. I didn't see the second movie until years after it's release, and it was just "okay." So watching this movie....for me, it's actually technically as much or perhaps even more fun than watching the originals, because I was here enjoying it purely on its own merits, and also because I was enjoying it from the visceral perspective of a father who has a son who is really, really in to Ghostbusters.

As anyone knows, when it comes to movies your kids are in to they generally fall into two categories:

Movies the kid really wants to see, and if you're lucky its a Pixar film with some wry hidden adult humor to keep the parent from going mad

Movies the parent really wants to see, and you justify it by telling yourself that your kid is more developed and smart and adjusted than most, so it's totally okay to take him to see that PG-13 movie.

Every now and then, though...you get lucky and find a movie where both kid and parent are delightfully entertained by the medium. Ghostbusters is one of those movies (so is the original....once I got my 1990-era hipster stick out of my butt, anyway!)

Five fun facts about this movie:

1. All the key players from the original have cameos hidden in the new movie, and some incredibly entertaining ones at that (Murray is the best! Aykroyd and then Weaver are close seconds)

2. This movie is only possible because geek culture now has women in it as a norm. Seriously....when the original Ghostbusters came out, despite there actually being geek women in the world, it was not considered at all proper for pop culture Hollywood to depict women as being in the least bit in to this sort of thing....and indeed it was just generally a "no no" in practically all facets of culture. Except in SciFi fandom, restricted to conventions. But on TV, or a big screen movie? Big no no.

3. This is an homage, reboot and kinda-sorta sequel wrapped up in one. I am not 100% sure why they went this direction....a "direct sequel, 30 years later" would have worked just as well, but they chose to go this route.

4. Chris Hemsworth was really damned funny, too. All of the key actors were funny, but Chris's role as the pretty but dumb receptionist was really amusing.

5. Kate McKinnon needs a movie that really lets her take off. I can see her in a Red Dwarf reboot, just so ya know...

Anyway! If you're not one of those people who pre-judged the movie long ago, I suggest you see it. Very funny, a great homage and pseudo-sequel with a lot of humor and the effects were actually pretty cool. Is it better than the original? I think objectively from my perspective they are roughly equivalent, with the caveat that the original has some venerable stars who be definition made that movie one notch greater than the remake....but the new Ghostbusters is head and shoulders better than the last sequel, and honestly damned funny and just plain fun.

And whodda thunk, another movie that comes in under 2 hours and somehow told a great, focused story! Wow!!!!

Ghostbusters get's a solid A for me and an A+++ from my son, judging by how hard it is to get him to go to sleep now.


Addendum: my diatribe on the inversion of men and women in the Ghostbusters franchise

Face it: had I not had a son who is so into Ghostbusters (and a wife who wants to see it too) then I probably would have waited until this movie was in the dollar theater, or maybe a discount priced Blu-Ray. Not because (as with Warcraft) I really wanted to see it but was afraid it would suck, but because I kinda like the Ghostbusters franchise but only in the general sense that I like lots of movies...so no driving impetus for me to see it other than free time and availability for the right price. But by coincidence it turned out to be more fun (for me) than I expected...and maybe even more so due to the fact that the general fan backlash prior to the film releasing told be there was probably something here more interesting just on principle. What I feel I got was less a "wow, amazing Ghostbusters movie" experience and more of a "Wow, we live in a time when four geek women can be the leads in a film like this that engages with the whole audience." That was pretty cool imo.

Or think of it like this: I am very proud that my son is (at least for now) able to have fun playing "Ghostbuster Girls" where he's just as cool being a female character in play acting as he is being Venkman or something. I felt the same way when he tells me he's Finn and I'll be Poe Dameron. It's a sign of the times as I see it that these normatives are not perceived as strange. When he's in grade school I expect the crushing weight of society's norms to barrel down and annihilate his sense of innocence on this, but for now it's just really damned cool. This does, in a sense, make it sound like the "all women cast" of the movie was more important in that way, but really it's the opposite....this movie effectively made it perfectly normal to have women in this role without casting a light on it. They were there just because it was totally okay for women to have lead roles in a fantasy action flick, just because it worked well, and not as a lampshade event. I really liked that. Stuff like this translates well to the next generation, for whom the idea that dad grew up in an era when the only female lead (Weaver) was allowed to exist as a foil for Murray to get the girl thanks to his geekishly hip and ironic charms, to thirty years later when the film can exist in a world where four women who are not there to be sex objects or the foil for men can just do their stuff busting ghosts. That right there?   ...it really was cool. I can't wait for Star Wars: Rogue One for this reason, either.

Posted by Doctor Futurity at 10:16 PM