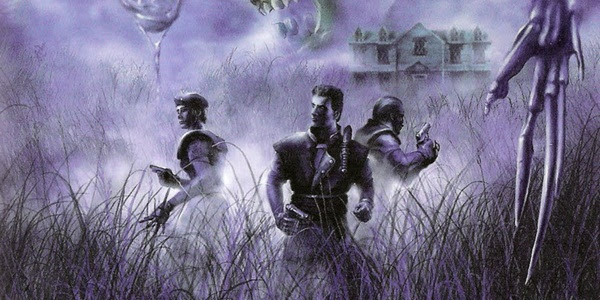 Drinking from the Resident Evil fire hose for the last couple months has been fun. This is a franchise that's a roller-coaster of quality, focus and interest across the board, from movies that appear to be whacked-out psychedelic trips through Alice in Zombie Land on down to the original adventure games full of weird puzzles and the current crop which is high-octane cinematic adventure that, like the films, sometimes requires leaps of logic too vast to span. And then there are the books...

The Resident Evil novel series started many years ago and I recall trying to read them and being unimpressed. I have also learned that almost any opinion of literature (fun or serious) that I had during my nebulous "Seattle years" spanning 1996-2005 is suspect, because during much of that time I was running on empty, literally; I worked a night-shift type job for most of those ten years and rarely got more than 3-4 hours of sleep every night, sometimes for months on end without reprise. I was in a strange relationship with my ex-wife and I often was too fatigued, worried and generally stressed to focus properly on anything. It's a miracle I was able to get anything done during this era.

As a result of this, I've often found that books I tried reading and discarded as too derivative, banal, uninteresting or annoying for whatever reason end up being much better now, in my "nicer years," where I get like...6 whole hours of sleep each night, I have a comfortable 7:30-4:30 PM type job, weekends always free, a wife with whom I have excellent synchronization and a son who is a total joy to raise. So yeah, I sometimes find books that I once dismissed to be actually rather fun.

The Resident Evil novels (not to be confused with the movie novelizations) were written by S.D. Perry and focus on actual adaptations of the original games up through Code: Veronica. There are seven books in the series. S.D. Perry is/was a master at the licensed adaptation, and did a very good job of writing engaging, suspenseful but otherwise lite-reading tales of the Resident Evil universe. I've gotten through two of them so far, will review more as we go along.

Umbrella Conspiracy starts with a direct adaptation of the events in the original game. it's a bit rocky, as you might imagine a tale of mercenary cops wandering in a haunted mansion full of zombies solving obscure adventure-style puzzles relying on adventure-game logic might be. We are treated to a bit of "pre-game" lead-in, explaining a bit about who the Special Tactics and Recon Squads (STARS) are, a sort of international mercenary outfit (think Blackwater, I guess) that is employed by Raccoon City to supplement and assist the local police department and is ostensibly also there at the request of Umbrella Corp, the pharmaceutical company that pretty much made Raccoon City what it is. We meet Jill Valentine, Chris Redfield, Rebecca Chambers and Barry Burton, as well as the ever-evil Albert Wesker in the few moments we get to know him before he flips his evil switch on.

This was S.D. Perry's first attempt at a novel outside of her work on the Alien and Alien vs. Predator franchises. It's a bit rough, and she does an admirable job of trying to recast the events of the game in a way that works for fiction. When I originally tried reading this I remember being annoyed at specific details, or just how the story was framed relative to the game, which was much fresher in my mind at the time. Today it's been so long that I'm just impressed that the tale is detailed enough to invoke memories of specific events, locations and characters or creatures from the original! So in that sense it's quite a success. Indeed, if you ever wanted to know what the original was about, but didn't have the endurance, dexterity or temerity to find and plow through the game, this book is more than suited to the task of getting you up to speed.

The most amusing bits about this novelization are the pieces which don't quite "fit" with later canon. Wesker here does indeed go evil somewhere along the way, although his motives and complicity in the process aren't as exaggerated or obvious as they later become in retrospect. He also doesn't technically live to the end....but that's a suitable reveal for when he comes back in the future. Other moments, such as Rebecca Chambers and her experiences in Resident Evil Zero aren't entirely in sync with this novel. But as always one can imagine that a fiction like this is an amalgamation of bits and pieces inevitably corrupted by the unreliable narrator if you wish to reconcile the book with the setting canon.

Still, I enjoyed it. This is light reading, and you could easily give this to your younger reader to enjoy; there's little or nothing in the way of purely mature content that I noticed, while an adult looking for something fun to read over a series of lunch breaks (as I did) will be entertained, if not provoked.

Technically Zero Hour is the seventh book in the series, but chronologically it happens just before Umbrella Conspiracy, being an adaptation of Resident Evil Zero, which tells about the fate of Bravo Team, the STARS unit that went in to investigate the mysterious cannibal attacks around the Spencer Mansion just a few hours before Alpha team followed. This is one of the Resident Evil games I didn't play all the way through, for various reasons having to do with my horrendous work schedule, troubled marriage and lack of general time during my years in Seattle, so reading it was a chance to fill in some of the gaps in my RE lore.

Rebecca Chambers is a child genius, who graduated from college by age 17 and was hired on to the STARS as a chemical specialist due to her incredible credentials. Presumably she had interesting aspirations for a teenage girl, or maybe the STARS just pay really well...either way, she is the focus of the tale, along with the wanted criminal and accused murderer Billy Coen, recently escaped from a military police transfer thanks to the freakish luck of passing through the remote mountains right when some serious zombie smack-down starts off.

Zero Hour is focused on explaining a few lingering plot threads from the original tale, namely what happened in the first place to cause the outbreak of the T-Virus. If you thought this was fairly evident (if not exactly spelled out) from the first book/game, then you would be right: until Zero Hour the general assumption was somehow, perhaps due to industrial sabotage or sheer ineptitude the virus was released, causing a lock-down at the Spencer Estate and, as it turns out, a previously unseen Umbrella retreat and research compound.

After Bravo team crashes (no helicopter can survive a Resident Evil tale), they spread out to look for evidence as they wait for a rescue from Alpha team. While Rebecca finds evidence of a private transport train to the compound (coming from Raccoon City, presumably) that's been massacred by something spreading the T-Virus, Billy Coen runs into her and they settle into an uneasy truce to survive against the mysterious horrors that are crawling all over the place. As the two explore the train they find evidence of mutated leeches that seem to cooperate like a hive mind, connected somehow to a mysterious stranger. When the train starts up they find themselves deposited at the Umbrella Retreat and Compound, driven to escape the maddening complex by an unseen foe who is bent on helping and hindering them.

Zero Hour is the seventh book S.D. Perry wrote and it is actually very solid, a better read than Umbrella Conspiracy, despite being subject to the pacing and approach of the game's story line. The net result is a more coherent read, and a chance to see what Rebecca was up to prior to her arriving at the Spencer Mansion and running into Chris Redfield. It also helps to set her up for further adventures in the next novel, Caliban Cove (which I shall review next week). I definitely suggest reading it immediately after Umbrella Conspiracy, and not before, despite it being a prequel; it meshes better this way, as the inconsistencies in the timeline caused by Capcom's monkeying with jamming this story line in to the mix are more tolerable with a retrospective approach than trying to reconcile them after the fact. Put another way; Umbrella Conspiracy makes for better reading if you follow up with Zero Hour rather than the other way around. Zero Hour is definitely an improvement all across the board, and worth checking out.

Next up is Caliban Cove, the second novel in the series, and an original story which takes place between Umbrella Conspiracy and City of the Dead (the adaptation of Resident Evil 2). I'm halfway through it right now, but S.D. Perry's chance to shine with an original story is already my favorite. But I shall save details for another batch of reviews next week!