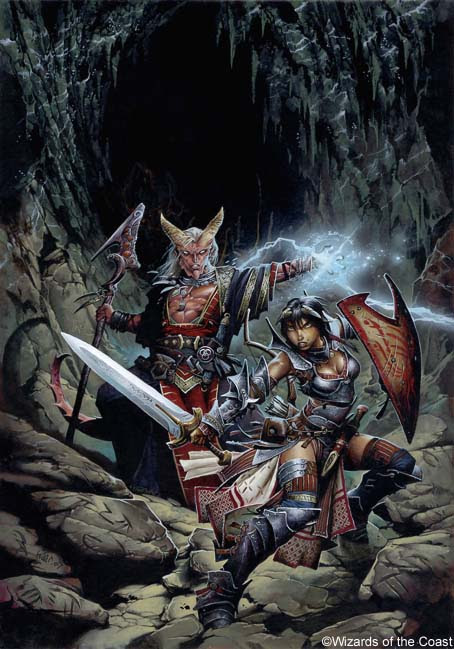 Easily one of my favorite Covers for 4E
I found one more recent article at ICv2, from John Riley talking about the comic industry's changes with DC as they move to a day-and-date focus on digital as well as print, and comparing the print side of the experience to the resurgence of interest in vinyl records. It's interesting reading, because I dare say that the tiny paper and pencil RPG industry could stand to learn from this. RPGs have something special to offer that other related media (computer games, board games and comics) do not, and if the surviving publishers learn to take advantage of that ephemeral thing that the tabletop RPG offers, it really should be able to find and retain its own niche. I guess the key is to learn what those specific strengths are, and to shy away from trying to compete with other media's offerings entirely. Interesting ideas. The question I guess is, what are the strengths that tabletop RPGs should be emphasizing right now, and are the handful of existing publishers really focused on them? Is the indie scene focused in the right direction? Is our hobby just too stagnant with old men griping about the Good Old Days to come around and stabilize in the face of so many other sources of entertainment, or can it make itself identifiable in a way that is both distinct and not time locked in the 1980s?

This last one might be a loaded question...lots of good about the old days, of course, but I think there's a severe split among old and young hobbyists today, and its hurting RPGs in a way that I don't think other media such as computer games or comics have quite had to deal with. The guy who thought the Silver Age of comics was the be-all-and-end-all usually still collects comics, for example; the gamer who loved Doom may bitch about the brown and grimy cover-based shooters of today but he still plays current games. The RPGer who eschews modern RPGs and holds up his 1980 rulebooks as an example of ideal gaming and accessibility is not, unfortunately, buying newer games today. Yes, they have their reason; I can empathize, as while I tend to love newer games and also those older games I know I am fairly unusual in this regard (at least from an internet sampling), but if there's one thing that drives me nuts its the FATE-based games, the Burning Wheel mechanics and other pretentious Forge-ish games that simply don't feel like role playing games as I know and understand them, so I try to use that point of reference to empathize with my cohorts who despise 4E, loathe 3E, and find 1st or 2nd edition D&D to be their pinnacle of fantasy gaming desire.

Ah, anyway. It seems like publishers out there--especially the publishers with the money--need to start looking at ways to nurture the hobby such that it both grows and retains gamers at the same time. We need something marketed as a singular experience in its own right, something that says, "sure, WoW is there, sure the 360 is there, but here, RPGs offer this distinctly different experience, come try it."

RPG publishers should look to Starbucks, is all I'm saying. Or the record Vinyl movement. This is where the hobby needs to go: selling an experience. Whatever that experience is. 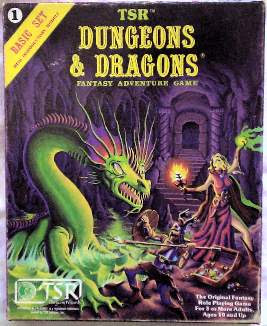 And my favorite cover from Waaay Back When
Posted by Doctor Futurity at 3:28 PM