I haven't posted in quite a while, failing my (very mild) commitment to blog more often! I suspect the days of blogs are certainly dimmed, if not over, as vlogs become all the rage, but I just can't bring myself to even entertain the idea, I feel hideously unphotogenic, let alone "video material."

For July, it looks like my post-vacation fugue turned from "what game will grab my interest?" into "Dungeons & Dragon 5E kind of does all I want for this particular genre of gaming." Part of this is no doubt due to the fact that I am only running one actual live game right now....and when  only have to focus as a GM on a single campaign, I find myself more creatively energized, less spent, and genuinely interested. As a result the campaign has been chugging along with lots of weirdness as I try to see what my players decide to do with their wayward characters.

I haven't abandoned other game prospects, though. I have a campaign for Call of Cthulhu in the works that takes the PCs back to a weird northwest set in 1812, to follow up on a strange campaign twist that happened in another modern day CoC campaign I ran back in 2018. We've been waiting for follow up on this one for years now, so good to get to it again.

I have also been slowly (very slowly) prepping campaign ideas for Mutant Year Zero and Savage Worlds Pathfinder. The latter languishes a bit due to my persistent desire to keep doing D&D 5E but maybe we'll jump in to it soon, I dunno. My Saturday game was postponed while my cohort in GMing for that night stepped up to plate and has been running the Extinction Curse (I think that's it) Adventure path for Pathfinder 2nd Edition. It's been fun to play, but I have been amused by the fact that I now think Pathfinder 2E is actually easier to GM than it is to play....and also more rewarding. As a player I am having fun, but the game's needless layers of complexity in character design are palpable when compared to D&D 5E, Savage Worlds, or even GURPS if I am being honest.

As a player I am also in a live game of Dungeon Crawl Classics a buddy of mine is running (the randomness of it all is a lot of fun, very core and basic but makes for fast-paced and entertaining gaming), Friday night Gaslight Cthulhu which will soon be rotated with a family-focused Dungeon Crawl Classics game my wife is trying to put together (I am interested to see how this goes, her interpretation of therewith!) and sooner or later we will get another Mothership game going, I imagine. Maybe.....I have some SF ideas I am experimenting with....which leads in to:

I'm still working on campaign ideas and stuff for GURPS, too. I don't know when or where I will spring these ideas, or on what hapless group, but I have a strong vision for the historical Egyptian campaign now, along with a fair amount of detail on a prospective exploration-based GURPS Space campaign.

Posted by Doctor Futurity at 3:40 PM 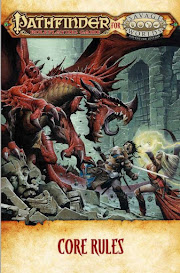